The reporting of pulses regarding supply, price & demand is far less than the major broad acre grains and oilseeds in Australia. In this article we begin to unpick the local situation and will follow up next week with an international perspective of markets. Chickpeas, just like most other crops this year have benefited from fantastic conditions, but along with that, comes a price penalty from the increase in supply as the likelihood of a big crop increases.

As we transition from old crop to new crop, prices have converged and plunged 21% this month, but a possible upside exists from the negative effects of a wet spring that could delay or spoil the crop.

ABARES has forecast Australia’s chickpea crop at 0.61mmt, more than double that of last year. (figure 1)

The lift in production has mostly come from a massive recovery of NSW plantings, up tenfold due to the breaking of the drought, a 30% increase in QLD plantings, coupled with excellent conditions for the 20-21 crop due to be harvested as early as next month in some regions.

SA and WA production is typically pretty tiny, but stable, while VIC harvests have historically been more significant, but still only a fraction of NSW and QLD, which make up the lions share most years.

In terms of yields, while VIC has more consistently achieved average yields over the 1.5 tonnes per hectare mark, QLD managed over 2 tonne back in 2016, and fairly regularly achieves higher yields per hectare than NSW, which typically delivers 1-1.25 tonnes  per hectare. Patrick O’Hara, grain accumulator from Agrocorp Dalby comments that due to the high soil moisture levels in NSW however, 1.5 tonnes to the hectare are expected in NSW, and dry conditions in QLD will result in yields on the lower end of the spectrum.

As the new harvest approaches, we usually see a convergence, or narrowing of the difference between old crop and new crop pricing, to reflect the merging though storage mechanisms of supply, and chick peas are no exception.

Old crop chickpea prices have crashed spectacularly by 21% since the start of August; to converge close in on new crop pricing levels, from a level of around $700,  (figure 2), to current prices of around $520-$550 to more strongly reflect the new crop pricing, which sits at $530-$541.

In addition, the typical pricing premium of Brisbane over Gladstone for new crop has also narrowed inwards in recent weeks, from over 12% at the start of August, to around -2% as of most recent trades. The premiums are often related to transport costs, and where loading of shipments is currently occurring, as Gladstone is over 500Km further north.

A big lift in production has resulted in this year’s crop being worth substantially less than last years’, settling on average around the $530 mark so far. However, the risk of frost damage, wet weather creating fungal problems, and delaying of harvest may create some upside potential in the market if these issues eventuate. 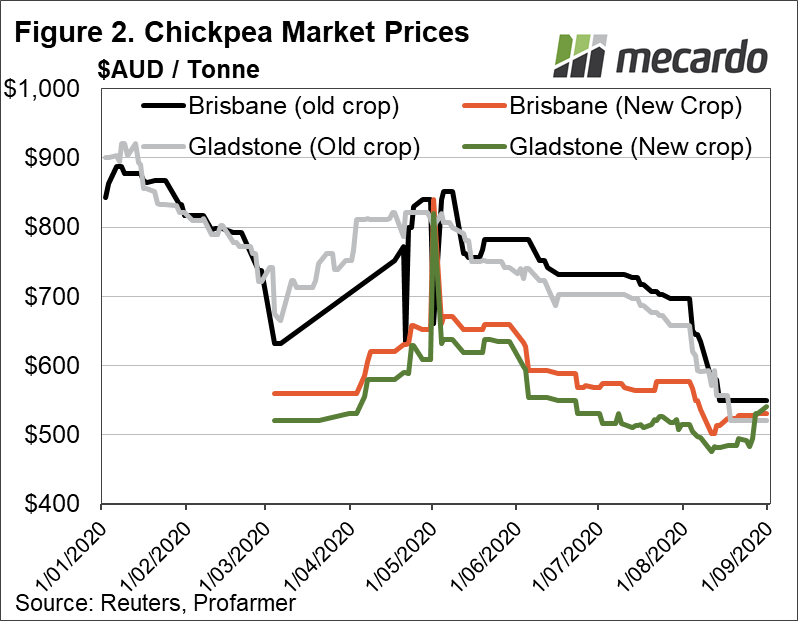