Cashmere is the big luxury fibre, for which the 16 micron wool price trades at a ratio between 0.1 and 0.2 (10% to 20%) as a rule. The big areas of production are in Inner and Outer Mongolia and across Afghanistan into Iran. Data on supply is relatively scarce so this article is taking full advantage of a recent presentation about Chinese cashmere production.

The Sustainable Fibre Alliance held a virtual conference this week, (Sustainability in the Cashmere Sector), at which there was some interesting presentations, some of which focussed on supply. This article draws on a presentation by a representative of ERDOS China, a processor of cashmere and retailer of cashmere apparel.

China accounts for a little over half of world cashmere production, of which some 60% comes from Inner Mongolia. Mongolia (the home of local boy “done well” Genghis Khan) itself accounts for about one third of production. The ABC ran a program called Nomadland recently looking at the challenges faced by nomadic herders which included overgrazing.

Figure 1 is a graph put up by ERDOS and shows the annual tested fibre diameter of Chinese cashmere since 2006. It is an interesting graph as it shows quite a rising trend in the average fibre diameter, around a full micron in the past 15 years. That is a big change in the nature of the Chinese cashmere clip. It is put down to crossbreeding between types of goats (hybridisation as it was put), presumably in an effort to breed for greater cashmere production and or a larger animal for meat.

A quick google of ERDOS shows that one of their key brands is 1436, fabric made from 14 micron cashmere fibres which are 36 mm long. Figure 2 shows why the presenter was concerned about the trend in increasing fibre diameter. It is an approximation of the effect of the change in fibre diameter since 2006 on the different micron categories of Chinese cashmere. The term approximation is used for two reasons. Firstly the distribution of the cashmere by micron is an educated guess, assuming a certain distribution around the average micron rather than using actual data. Secondly the distribution used is a normal (balanced) one which is not quite correct as the cashmere distribution will be slightly left skewed as it runs into limitations about how fine it can go. This caveat is to say Figure 2 only gives a rough idea of the changes by micron category in the Chinese cashmere clip since 2006.

Figure 2 shows some big falls in the supply of Chinese cashmere under 15 micron, around 50% for 14 micron. If you have a brand based on the supply of 14 micron cashmere, this is a problem. While the supply of 17 micron and broader cashmere has lifted, it is the structural fall in the sub-16 micron supply which is of potential interest for the wool industry.

Fine merino prices tend to trade within established ratios to cashmere prices. It is unclear how a falling supply of cashmere would affect these ratios, but fine merino wool would be nicely placed to help fill some of the gap in supply. The scuttlebutt says that this has been happening for a long time. 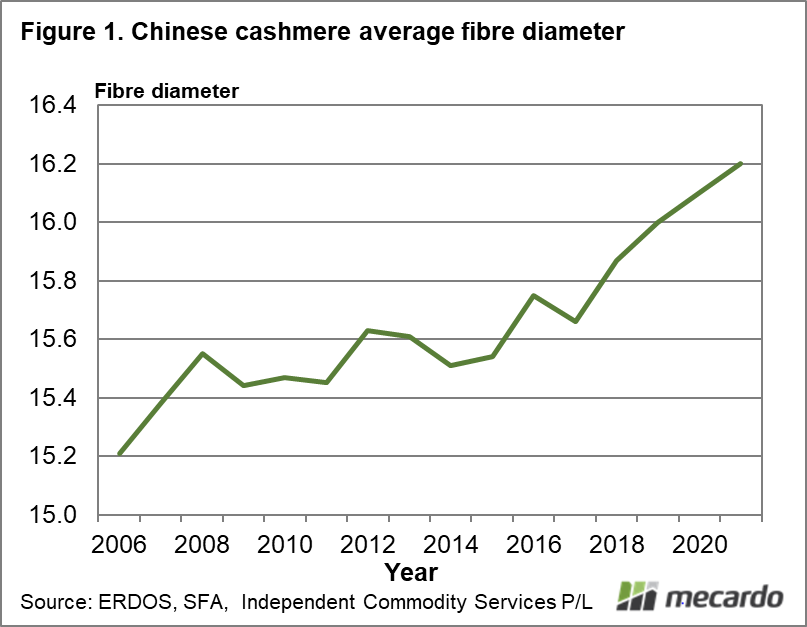