Corn has hit the highest level seen in six years, China’s demand for feedgrains seems insatiable, and managed money is adding to their bought positions, which all points toward significant bullishness being present within the feedgrain market. All eyes in the market will be on the USDA’s next WASDE release on February 9th.

Corn hit a new six year record this week, of $US 218/Mt ($5.54/bushel)  (figure 1) with high enthusiasm being driven by massive purchases of US corn coming out of China. In total last week, in USDA flash sales reports, China tallied purchases of 5.9 million tons, with 2.1 million tons reported on a single day; a historically significant ‘all-time’ record.

Last time corn prices were at such high levels, it was primarily supply driven, with USA in the grip of a widesweeping drought, prices then were in the $US270-300/Mt (~$US7-7.50/bushel) mark.

The significance of the mammoth sized flash sales on the market is not only the obvious potential bullishness for demand, but also the resultant impact that it will have on the all-important stocks to use ratio measure. The stocks to use ratio is a common yardstick that quantifies how tight the demand and supply situation is, as discussed in previous Mecardo articles (view article here).

With the news of a significant amount of Corn now confirmed to be entering the vacuum of no return that is China, and with recent sales possibly just the start of a continuing trend. It’s expected that the USDA will need to downgrade it’s estimates of final stocks in the next WASDE release- the question is just by how much. With the WASDE seen as the gold standard in global grains forecasting, the market will typically react strongly to any significant shift in its estimates.

Professional managed funds such as hedge funds have responded by adding to their bought positions. (figure 2)

As of the last trader position report, the net position of managed money traders jumped 15K ( ~4%) contracts to 365K long as a result of the addition of 10K contracts long, and the closing out of 4.5K short contracts. This brought managed money’s total share of net open interest to just above 14%. The closing out of the short positions represented close to a 14% shrinkage in the relatively tiny sold position of just 33K contracts.

Managed money is often referred to as the “smart money” in the market due to their assumed access to significant analytical resources, and breadth of industry insider relationships. Their big long position, and relatively tiny short position indicates that as a group, their sentiment is strongly bullish, with not many betting on a price fall. Remember though, as discussed in earlier articles, because of the sheer size of their trading power, their activity can push the market, so if their collective opinion changes, they can quickly send the market plunging if they close out their bought positions.

In addition, in recent weeks, the reported net futures positions of producers and manufacturers have become more heavily sold, indicating that on the balance, farmers are selling, and locking in the high prices recently achieved.

China’s recent huge purchase of corn from the US put a rocket under the futures market, driving prices skyward to levels not seen in six years. Speculative traders from managed money funds have piled in, increasing their long positions, adding further fuel to the blaze. Corn is a major component of the worldwide feedgrains complex, and as such, it can be expected that buoyant corn prices will flow through to support the price of other grains and oilseeds such as wheat, barley and canola, which are more relevant to Australian producers. 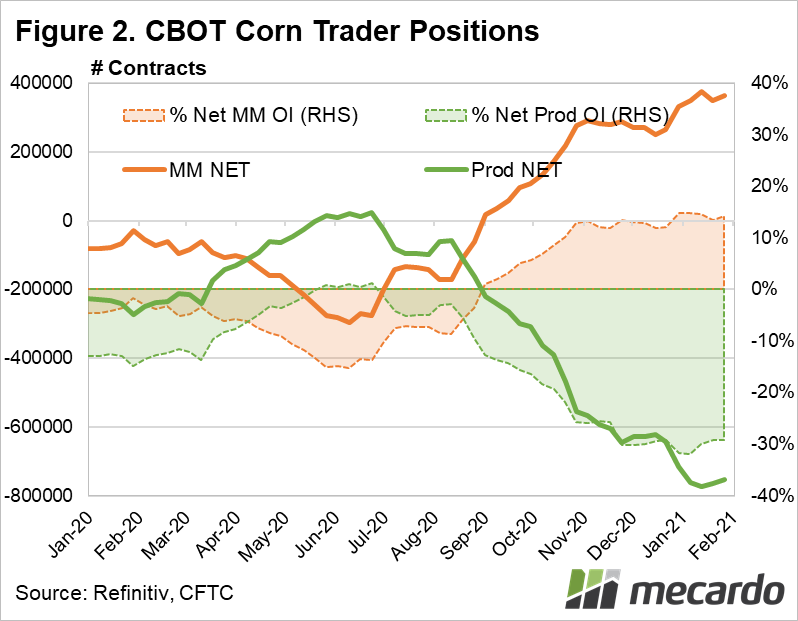