Cotton prices are having a stellar run, ignoring logistic issues, war and rising interest rates with the likely knock on effect of lower economic growth. This article takes a look at the cotton price and the ratio of 21 micron to it.

In April Mecardo looked at the rolling 5 year price rankings for apparel fibre, showing how cotton and cashmere were the best performing fibres in terms of price during the past five years. If anything this analysis underplayed the strength of the cotton price.

Figure 3 changes the comparison to the 21 MPG and the ratio of the 21 MPG to the Cotlook Index. The peak ratio is around 9 (where the 21 MPG is nine times the Cotlook Index) reached in 1973, 1988 and early 2019. Each of these periods was a time of extremely strong wool prices. On the other side a ratio of 2-2.5 is the low side of the ratio, a level reached more often, especially in the decade of the 1990s as the market struggled under stockpiles accumulated in the late 1980s under the auspices of the reserve price scheme.

Since late December 2000, the price ratio has fallen to around 2.5 only twice, in early 2011 and now, when the cotton price rose to extreme highs. The current 21 MPG is dirt cheap in relation to cotton (albeit which is very expensive) which implies that there is little downside risk for the 21 MPG while cotton stays at high levels. Even if the Cotlook Index falls back to median levels for the past decade, the 21 MPG price ratio would return to be around the median for the past decade which is 6.2.

During the past 50 years a ratio of the 21 MPG to the Cotlook Index has ranged between 2-2.5 to 9. It is currently around 2.5, which is very low. This implies there is little downside to the 21 MPG while the cotton price is high. Even if the cotton price returns to longer run median levels (a fall of 40-50%), the price ratio for the current 21 MPG would still be only around longer run median levels. 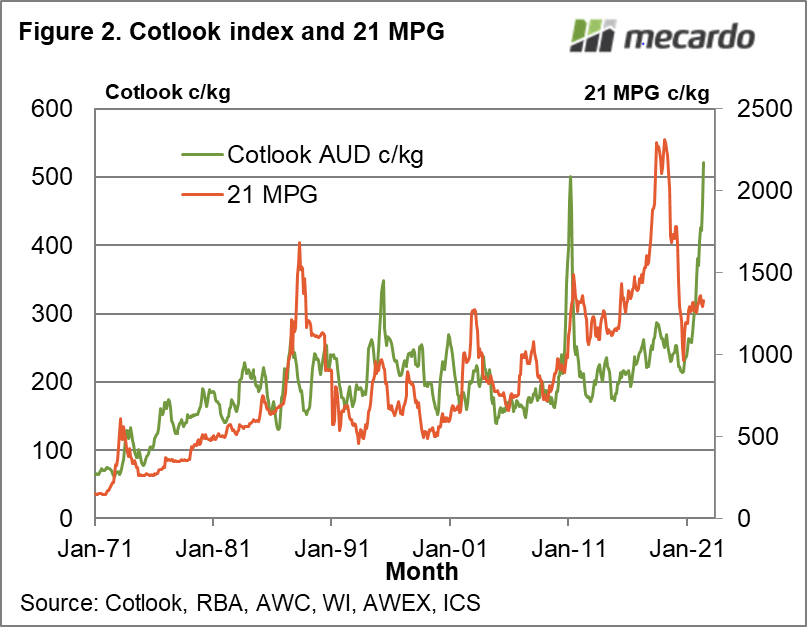 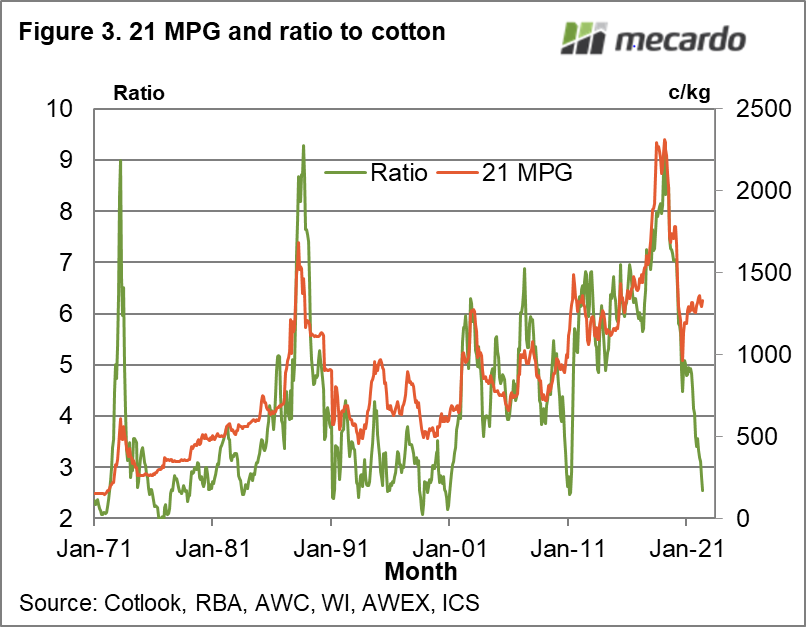