Count on the USDA to knock your stocks off

The USDA published its assortment of January crop reports earlier in the week, with the World Agriculture Supply & Demand Estimates (WASDE), along with the Quarterly Grain Stocks Report, and the Winter Wheat and Canola Seedings Report released. Analysts had bullish expectations for this WASDE, based on pre-report forecasts, and they were not disappointed.

The USDA reduced US estimated ending stocks of corn, soybeans and wheat in the January report compared to their December report estimates. As a result, nearby futures prices rocketed upwards for the major crop commodities. Within the first hour of trading post-WASDE, spot corn futures were up 25 cents/bu, trading at the highest price since July of 2013. Spot soybean futures were up 45 cents/bu, and spot wheat futures were up ~30 cents/bu.

Corn has been a major driver of wheat prices and the latest update from the WASDE has once again seen wheat prices swept up in the corn rally. Tight global supplies are likely to keep prices elevated and with the La Niña in play, the trade will have eyes on the progress of the South American crop. The strong crop prices, paired with the increasingly shrinking stocks, should only further drive acreage competition in the US as they approach the spring planting in 2021. 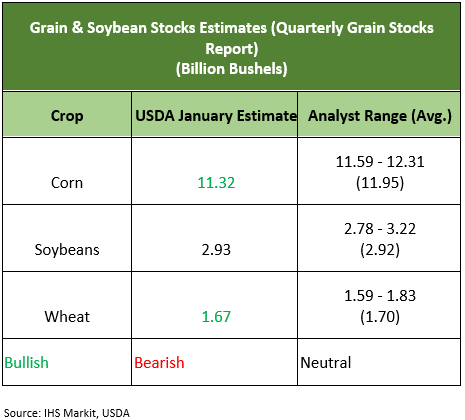