Cows are still in strong demand as the industry works towards the forecast 1.1 million head herd growth in 2022. Last week the National Medium Cow indicator hit a record high of 388ȼ/kg liveweight, putting it at more than $1/kg dearer than the same day the previous year. That price has since lost almost all the gains made since it started to rise in early February but remains at an 85ȼ/kg premium year-on-year. However, comparatively, the US export 90CL price is tracking at 279ȼ/kg above year-ago levels, and the EYCI is 257ȼ/kg higher.

The Medium cow average weekly price broke through 300ȼ/kg for the first time in July last year and has been trading at 350ȼ/kg or higher since October 2021 – with the exception of the last week of January, which was likely impacted by public holidays and Covid-19 impacts on processing. Last week the price averaged 363ȼ/kg, having reached a record average weekly return of 386ȼ/kg the week prior. Since seasonal conditions turned more favourable in 2020, restockers have been competing with processors on a depleted herd, but it’s the strong export demand processors are experiencing, that is keeping the vigour in the market. Locally it’s NSW restockers that are leading the charge.

Last week’s record high was one perfect example of this. Dubbo contributed more than 18% of the cattle to the Medium Cow seven day rolling average, with buyers at that yard paying an impressive 515ȼ/kg liveweight average for eligible females, whilst restockers were averaging 545ȼ/kg lwt. All other NSW yards contributed 4% or less to the tally, making their averages fairly inconsequential. Queensland had the next three highest contributing yards and averaged at least 20ȼ/kg lower than the indicator price. Restockers have been consistently paying a 5ȼ/kg or more premium for medium cows over the past fortnight and averaging about 15% of the purchases.

Looking at the processing side, the National Cow price finished last week 31% higher year-on-year, while the 90CL price has climbed 43% in the same period and is showing no signs of decline – as we can see in figure one, that spread has remained pretty consistent since mid-2021. The herd rebuild continues to restrict volumes in this area, and while Brazil and New Zealand have picked up some of the slack in recent months, their import quota and seasonal processing schedule (respectively) could see their volumes drop off in coming months too.

Saleyard cow prices are up, yes, but they are still being outpaced by the US export price, and generally by young cattle prices too, meaning they remain feasible for both restockers and processors. If numbers tighten any further before we hit expected rebuild figures, there could be room for some upward movement – while downward pressure is unlikely for the near to medium term. 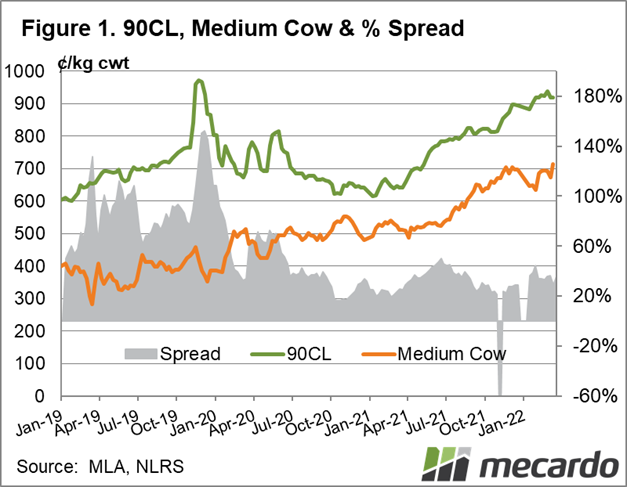