In an article last June, we saw how the gross sales value of crossbred wool (effectively non-merino wool sold at auction in Australia) had returned to its pre-2011 level, which was roughly half that of the annual sales value for the period from 2011 to 2018-19. The average crossbred price in US dollar terms was also back to pre-2011 levels, between 50% and 60% of the price levels enjoyed between 2011 and 2018-19.

Figure 1 shows the annual (by wool selling season) value of crossbred wool sold at auction in Australia (bars) which refers to the right hand scale. The line superimposed on the graph shows the annual volume in clean terms of this wool sold at auction (referring to the left hand axis). While the gross value of sales has picked up slightly this year it remains at 2010 levels. The supply chain seems comfortable in spending US$120-130 million per year, but that is the limit.

Despite the lack of enthusiasm in spending on crossbred wool by the supply chain, the volume of sales in 2021-22 was the second highest for the past 27 years at 39,699 metric tonnes, marginally lower than the peak year of 2011-12 when 40, 721 tonnes were sold at auction. There appears to be plenty of appetite still, for volume at a low price.

In Figure 2 the volume is replaced with the average crossbred price. The consequence of the rebound in sales volumes from the low of 2019-20, when a combination of a falling apparel fibre cycle in 2019 was joined to a pandemic in 2020, has been the crushing of price. The industry has sold a lot of crossbred wool while the supply chain has not changed the total dollars spent in a significant way, so price had to shrink.

As mentioned last year, South American producers have a reasonable proportion of their flocks producing what we call crossbred wool in Australia. Friends of Mecardo in Uruguay indicate that some of these producers are switching out of their Corriedales into beef enterprises in response to the extended period of low crossbred wool prices. Simple modelling of supply response by Australian farmers indicates that a change in relative prices which last for a round 5 years usually results in changes to enterprise mixes on farm. We are entering the fourth season since crossbred prices fell heavily so the reports of changes in Uruguay make sense.

The supply chain seems comfortable in spending US$120-130 million dollars per season on crossbred wool, with the average price received a function of volume and this apparent spending limit. High volumes have pushed the price to very low levels, with the fourth season of low prices beginning. A supply response to these low prices will become apparent in the next couple of seasons. 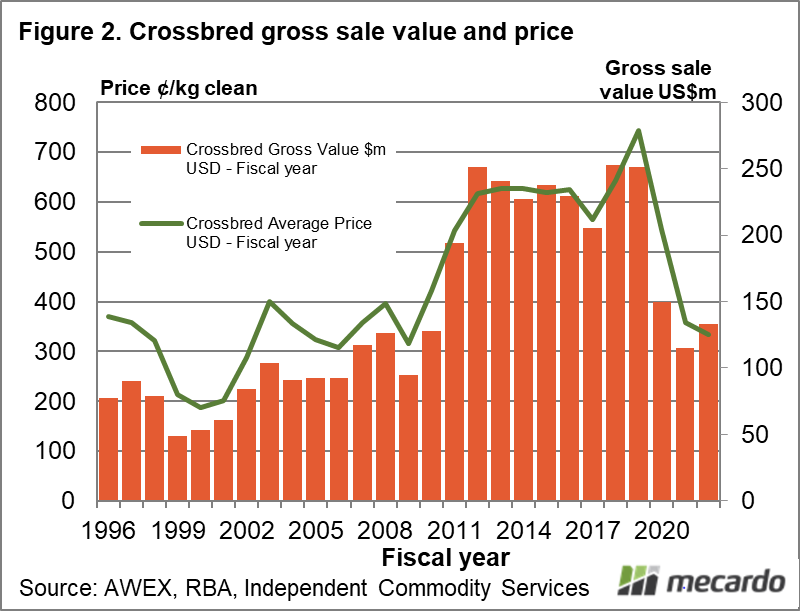