Death by a thousand cuts

Looks like we are jumping straight into the silly season and skipping the boring mid-season slump. From being in a seemingly comfortable place, wheat has, after a series of produc-tion cuts, started to look a little tight. Over the space of two weeks, global wheat production has lost something like 10mmt and we are still getting our heads around what is happening in Canada.

Firstly, Russia has been the biggest surprise.  A few weeks ago, some analysts were tipping a 85-86mmt wheat crop.  Earlier this week, SovEcon cut production to 76.4mmt (-5.9mmt) and IKAR published a 77mmt (-4.5mmt) based on hot and dry weather over the past couple of weeks as well as earlier winter kill issues. As a result of these cuts, Black Sea origin FOB values have risen between US$5-7/t.

Agriculture and Agri-Food Canada (AAFC) cut its most recent forecast of spring wheat production by 11% to 25.6mmt, down sharply from previous estimates. That agency also reduced spring wheat export forecasts to 17.7mmt, down 16% from last year. There is still a lot of speculation around Canada with production estimates ranging from 20 – 30mmt.  Ahead of the USDA’a WASDE August report, it will be interesting to see if, and how much the USDA cut production.

While there has been some trimming of estimates in the EU27, it is still expecting a big crop and combined with Australia (30mmt?) will go some way towards stabilising global wheat supply.

It appears that major exporter supplies are going to run down this season and become worryingly tight.  There is no clear substitute for wheat with corn production also facing problems.  After the Southern Hemisphere harvest (Aust and Argentina) there will be no new crop entering the supply channels until July/August next year.  Expect wheat prices to stay inflated or at the very least volatile, for some them to come.

Next week:  Finally, a word of caution.  As they say in the trade, nothing cures high prices like high prices.  If prices get too high, some countries may be forced to buy hand to mouth simply as a means to manage credit. 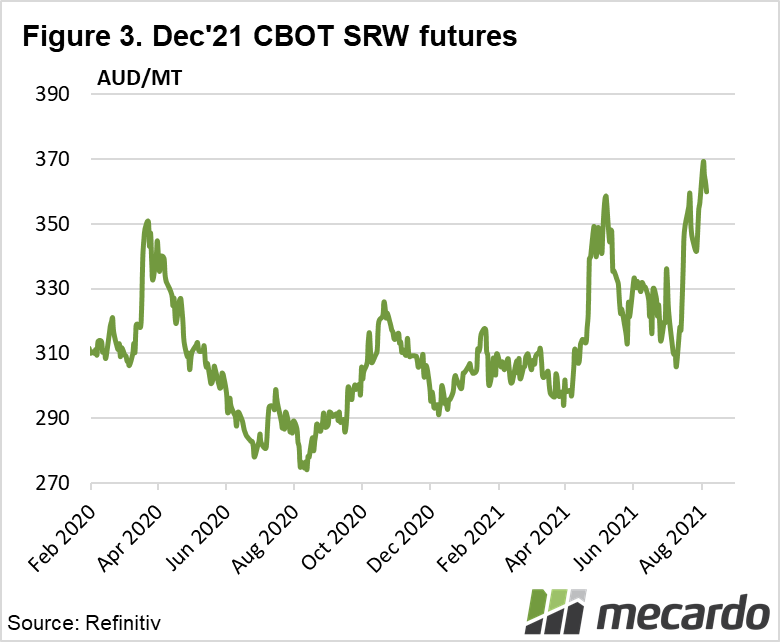