Feed demand and hence prices can be looked at as a solid indicator of pastoral conditions, producer intentions, and of course availability. QLD hay prices have retained relative strength on the back of robust feedlot demand, but prices in the rest of the country will remain soft until we see a significant change in seasonal conditions.

The numbers in the report represent an independent and unbiased view of indicative costs for mid-range quality specification, shedded hay that is free from weather damage. Prices are expressed exclusive of GST, on a delivered basis to dairy farms in the region (Table 1)

The Bega Valley cereal market in NSW, has also sustained substantial price falls over the period of $187/ton (40%) (figure 3). However, it trades at a solid premium over all other regions, at $300/ton. The story is the same for other specifications of hay commodities, such as lucerne, straw and pasture.

ABARES reports that Australia exported 1.24mmt of oaten hay in 2020, valued at $563 million, with over half coming out of WA. China did account for 350ktpa, but trade tensions caused most Australian export licenses not to be renewed in 2021, causing export volumes to China to decline by over 35% to under 200ktpa.

The dairy industry is a significant driver of demand for feed products. The 2020 Dairy Australia farmer survey showed that nearly all of the 5,000 dairy farmers across Australia provide additional feed to their herds in the form of grain, hay and silage, to the tune of 1.7 ton/cow p.a. This equates to around 2.38mmt per annum of feed demand from the sector’s 1.4 million cows.

Solid milk prices, coupled with good seasons have renewed confidence and profitability in the dairy sector. 26% of dairy farmers are looking to expand their operations, although severe labour constraints coupled with competition for land, and skyrocketing input prices are pressuring margins.

Expanding beef cattle herds and sheep flocks is a potential source of growth in demand for supplementary feeding. MLA is forecasting that the sheep flock will grow between 2021 and 2024 by 8.3% to 76.8 million head, and cattle by 10% 28.9m head.

The BOM recently announced that we are no longer under the influence of La Nina. When seasonal conditions inevitably turn for the worse, more mouths to feed coupled with reduced supply stemming from the poorer growing conditions, will put upward pressure on fodder prices again. 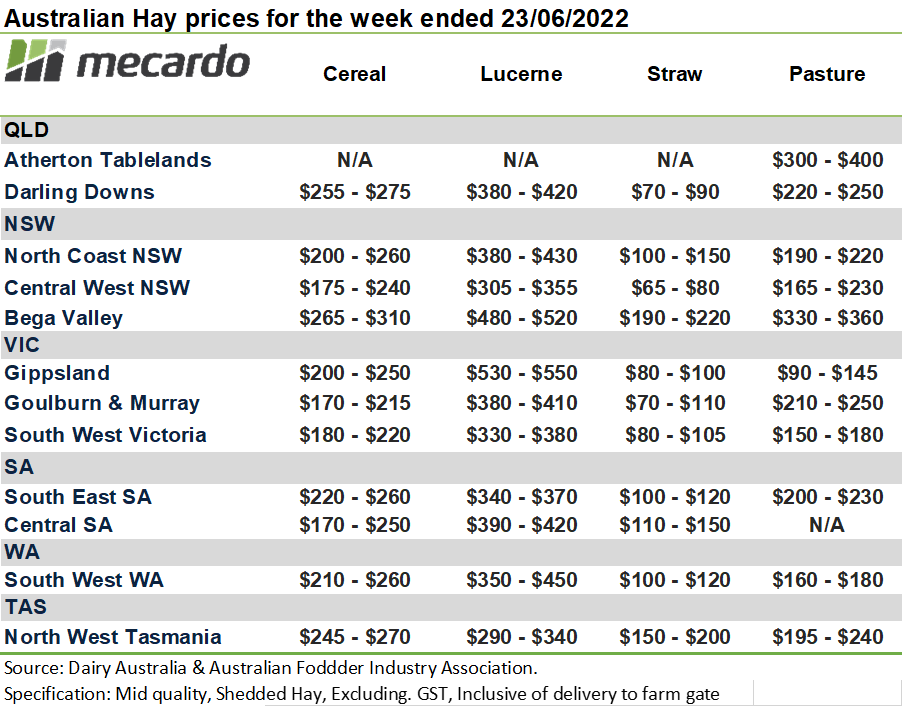