The Merino fibre diameter continued to fine up in December (down by 0.15 micron) with a consequent shift in the Merino production to the finer micron categories. However the overall Australian average masks a wide discrepancy between the eastern regions and Western Australia.

In December the average fibre diameter of Merino wool sold at auction was 18.6 micron, down by 0.15 micron on December 2020 sales. As noted in the introduction, this Australia wide average masked wildly variant trends in the east and west. In eastern Australia, the average Merino fibre diameter was down 0.36 micron (sales data), while in Western Australia it was up by 0.61 micron (sales data).

Figure 1 shows the change in AWTA volumes in proportional terms for the December quarter compared to the same period a year earlier (left hand axis) along with the micron distribution in farm bales (right hand axis). Sub-18 micron volumes were all up, while the 21 and 22 micron volumes were down, which is consistent with the lower average Merino fibre diameter. AWTA data does not distinguish between breeds (a nice idea) so as a rule Merino wool is assumed to dominate the micron categories until 22 micron, with crossbred wool dominating the broader micron ranges.

To illustrate the difference between Western Australia and the eastern regions in terms of wool supply trends at present, Figure 2 separates the year on year change for the December quarter. The western clip is 95% Merino, although it too turns to crossbred from 23 micron onwards, while the eastern clip was 78% Merino in the past year. In Western Australia, the supply of fine Merino wool was down markedly in the December quarter with the broader Merino micron volumes up very strongly, in contrast to the pattern seen in the east.

Supply pressure on the micron price curve will continue to build through the second half of this season. The curve continues to be steep (large price differences between micron categories such as the 366 cents difference between the 21 and 19 MPGs) so there is plenty of scope for the curve to flatten. 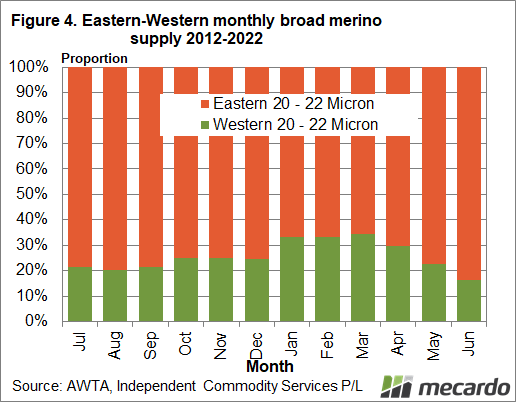