A week can be a long time in grain marketing. It won’t be the last time I mutter this under my breath as the seemingly obvious market trajectory is taken on a different course. This time it was the USDA’s June acreage report. Corn (and to a lesser extent wheat) acres came in significantly under the trades expectations, effectively wiping 25mmt off the corn balance sheet. The fund managers who held a record short (sold position) for this time of year have been burned and have had to do some serious readjusting.

What does it all mean?  For one thing, it brings weather over the next few weeks into much sharper focus.  The US corn crop was sown early into ideal conditions.  It is looking good at 70% good to excellent (down 2% on last week).  The critical pollination period is about to start – right in time for the first seasons heat wave. Pollinating corn and heat are not good bedfellows and it tends to make the market nervous.   How this impacts wheat will be interesting to follow.

The sharp rally in wheat on Wednesday was caused by successive cuts to global production.  Firstly, French analyst AgriMer penned a 21% reduction in soft wheat production year on year.  While this was largely expected, to have it confirmed seemed to rattle the market.  Argentina has also reduced expected production to 18-19mmt, down ~3mmt on the back of dry planting conditions.  As above, the rally was exacerbated by fund managers readjusting their short positions in CBOT wheat.

On the subject of wheat, Russian yields have not improved as expected.  We know that southern areas in the Russian Federation have performed poorly (~50% yield decline year on year) but the key wheat-producing regions of Rostov and Krasnodar were expected to compensate.  However, more recent yield updates indicate that Krasnodar yields are running about 4.5t/ha down 25% year on year. Current estimates for Russian wheat production narrowed slightly to 75-80mmt.

The rest of the world seems to be quietly going about its business.  The EU27, while having lost a fair bit of its potential early, has stabilised after recent rain. Barley harvest is at 49% complete and wheat harvest around 4% complete.  Good to excellent crop ratings unchanged at 56%.  Canada had some beneficial summer storms through most of the prairies which will no doubt help crop prospects there.

Ultimately, there will be a few bumps along the way as the market digests weather and production data during the next few months.  The important thing to remember is that stocks to use is relatively tight in the major exporters and any production cuts are going to have an impact. The fun is only just beginning.

After such a sharp rally in wheat, you would expect the profit takers to come in and reclaim some of the gains.  Watch for further production cuts to Russia which should see positive price action.  Domestically, consumers are lifting old crop barley bids to help fill the winter feed gap. 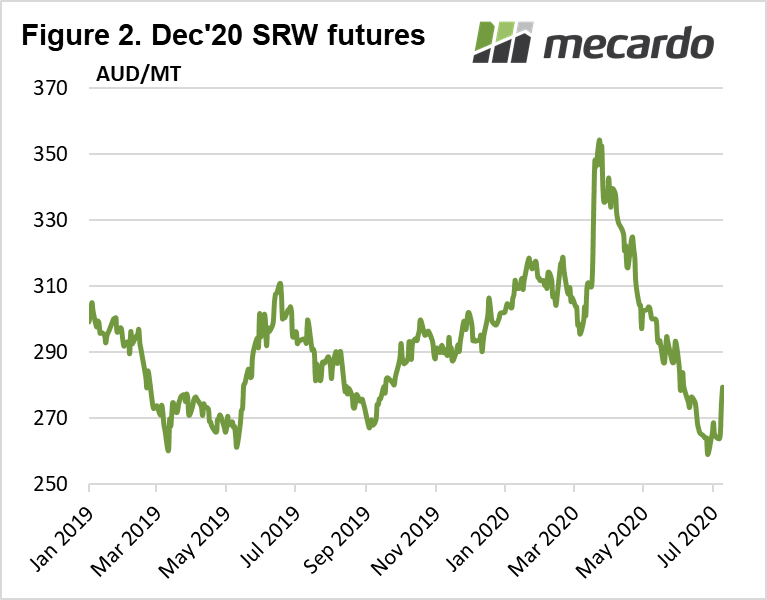