Australians eat a lot of beef, typically, over 50% of production is consumed within our borders, both at home, and in a restaurant setting. The COVID-19 slowdown has hit the economy where it hurts, especially the hospitality industry. The latest available figures for the first half of 2020 indicate that Australia’s taste for beef has recently declined as much as 15%, but will it recover?

In June 2020, Australia only consumed an estimated 82,000 tonnes of beef (figure 1), which is more than 18% below the five-year average of around 100,000 for the same time of year. For the half year to date, total beef consumption was 6% below the average, but most of that decline was booked in the latter part of the second quarter, which was when COVID-19 restrictions had eased somewhat.

This raises the question of whether the new trend of lower domestic beef demand is a symptom of high retail prices and lack of foodservice, or, more fundamentally, changes in eating habits brought on by COVID-19 lockdowns and restrictions? As a nation, are we eating less beef? After clearing the shelves and greedily filling the freezers back in March and April, did we lose some of our taste for paying a premium for it?

Over the last 15 years or so, it is estimated that Australia typically consumes between 1.1 and 1.2 million tonnes of beef every year. Over the last five years, this has represented more than 50% of the nation’s total production. However, as we can see on (figure 2) while domestic demand has been relatively stable, exports have risen significantly in recent years, with the world’s hunger for beef outpacing our own.

When we look at implied domestic demand on a per-state basis (figure 3) – on the surface it appears that Queensland is our nation’s biggest consumer of beef, at over 40% of the nation’s total, closely followed by New South Wales at ~26% and Victoria at ~20%.  However, these figures aren’t necessarily indicative of where in Australia the beef is finally consumed, and are more related to the level of production in each state, as beef is shipped all across the country before it lands on our plate.

For the first half of 2020, Australia’s demand for beef appears to have dipped to more than 15% below average as of June 2020. If this trend continues, we could see domestic demand fall back to the level we saw in 2016. Australian’s represent over 50% of our market for beef, and a 10% dip in domestic demand is equivalent to almost half our annual exports to the US. Finding a home for the beef we aren’t eating at record prices stoked by a herd rebuild next year may create downward pressure on prices. 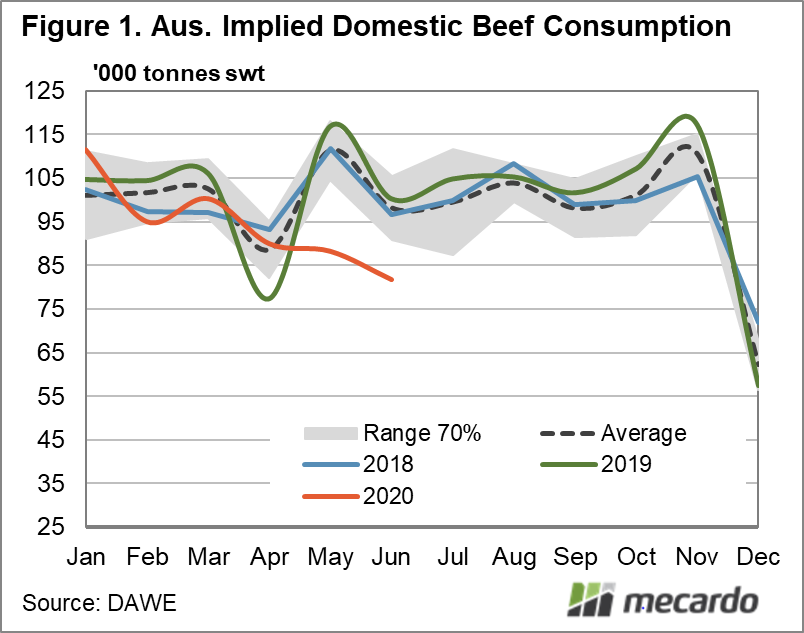 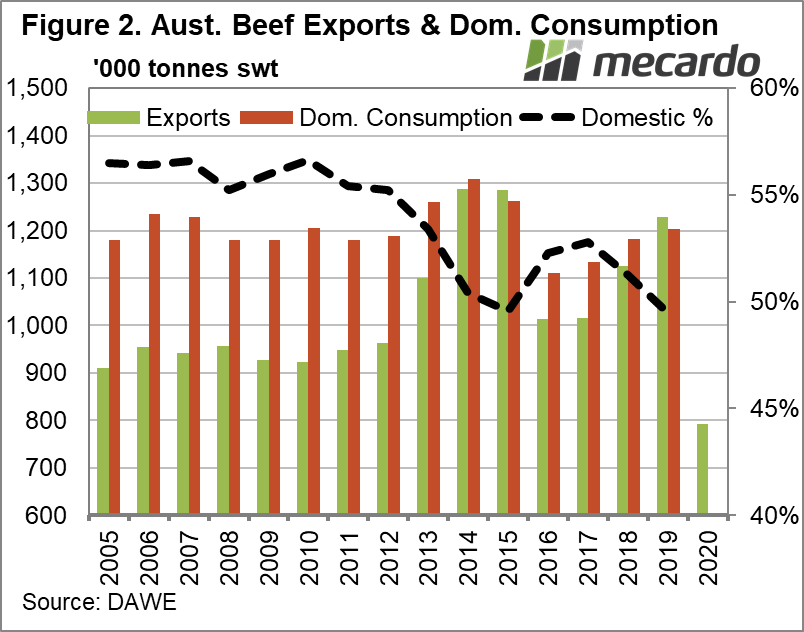