Things were looking up for processors when we last had a look at their estimated margins, and they’ve managed to move very close to within the 70% range for the winter months. Historically, figure one shows us their profits increase through the spring months when cattle are in abundance, however last year they went the other way, reaching a new low in November.

The Mecardo processor margin model for August (the latest complete data available) came out at a loss of $130.35 a head. This is more than a $40 decrease since July, when the margin hit its highest point for the year at -$87.64. However, it is still considerably better for processors year-on-year, with updated data estimating they were losing $230.48 a head in August 2020.

On an average basis for the year, the processor is still worse off, with the average loss at $164.33 a head for the year-to-August. This is the biggest loss margin in the past two decades. For the same period in 2020, the average loss was $63.11, and it is worth noting that the entire year average was $120.15, which means it doubled after the spring.

The positives for processors has been the lift in co-product prices, with the total per head returns coming back at just shy of $291 in August, one of the highest prices on record, and close to 40% higher year-on-year. The US export price (90CL) has also been on the rise, averaging about 815¢/kg in August, up from 672¢/kg in August last year, and 22% higher than where it started the year.

On the flip side however, the national saleyard medium cow price averaged 655¢/kg (carcass weight) in August, up 17% on the same month the previous year, and having also jumped 17% since the beginning of 2021. And it goes without saying which side of the fence the Eastern States Young Cattle Indicator is on, averaging 1008¢/kg in August, compared to 770¢/kg for the same month last year. And it has only been surging higher since then, reaching another record of 1057¢/kg this week.

Looking ahead, there is little to indicate any downward pressure on the beef sell price, with international economies bouncing back from Covid-19 and supply shortages out of South America, one of our biggest beef competitors. The same can be said for domestic cattle prices though, with a second stellar spring in the south buoying restockers and lotfeeders paying record prices. 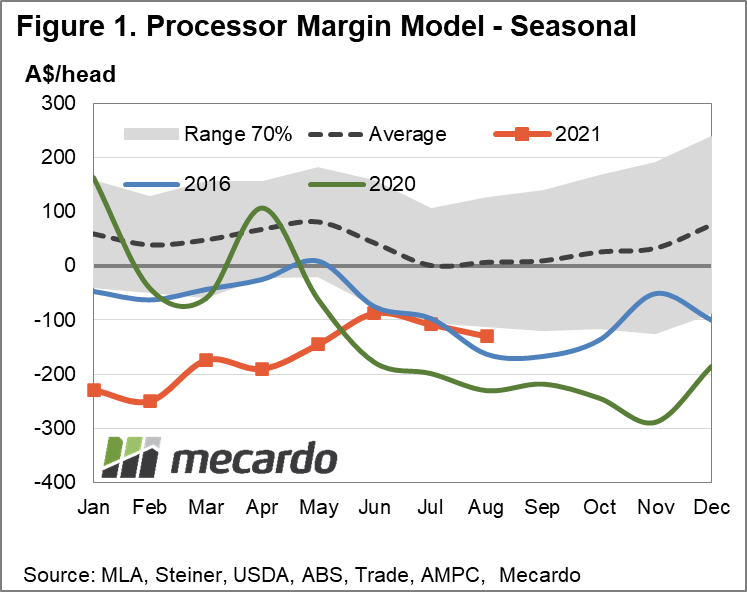