Tight supply helped lend support to most categories of cattle. The heavy steer saw the best result with a weekly gain of 9% to close at 382¢/kg. Medium cows rose 3% to 271¢/kg lwt. It was only the Restocker Steer category that softened, albeit only marginally, down just 5 cents to 271¢/kg lwt. Both Processor and Feeder Steers found some support.

East coast cattle yardings saw a significant drop on the week. Just 34,744 cattle were yarded in the week ending the 12th of May, which was a 29% drop on the week prior. Much of the fall was driven by Queensland with nearly 10,000 fewer head presented, but all states contributed to the tightening supply.

Slaughter levels rebounded slightly after last weeks low, rising 5% to see 126,034 head processed on the east coast. This was 12% under the same week in 2019.

There is rain on the short term forecast for much of Victoria, NSW and the coast of SA and WA. If slaughter and yardings stay this tight we will continue to see support for prices at the saleyard. How long tight supply can prop up saleyard cattle prices despite weaker demand in export markets is the unknown we’re waiting to play out. 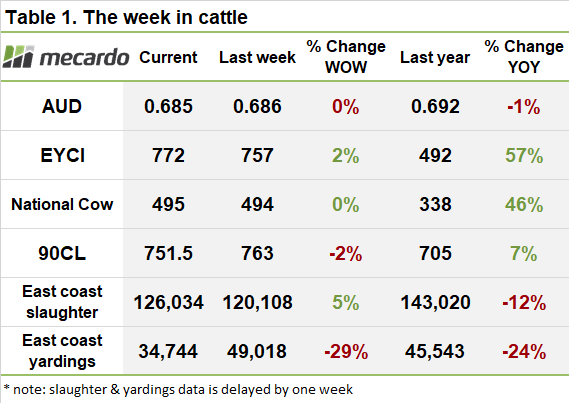