Down cycle extended by pandemic

After trending lower for 18 months, wool prices would normally start to look for reasons to stabilise. That appeared to be the case in late 2019, but the occurrence of a pandemic (COVID-19) has added a further leg to the existing cyclical downturn in wool prices. This article takes a look at the latest step down in price.

It is helpful, if somewhat occasionally confusing, to look at wool prices in both Australian and USD dollar terms. Usually they tell the same story in terms of trends and cycles. In the current market the views vary in terms of value, with the US dollar value (percentile if you like) a lot lower than we see in Australian dollar terms.

With the price falls this week in place, wool prices in US dollar terms are plumbing five year lows. 2015 was the last major down cycle. Figure 1 shows the 17 MPG in Australian and US dollar terms from early 1997 to this week. The US dollar value is very close to its five year lows while the Australian dollar value for the 17 MPG is close to its 35th percentile for the past five years – still higher than for 35% of the past five years. For the 17 MPG we watch to see if new business comes into the market to hold it at or above US1000 cents. If not the next set of lows, reached in 20008 and the early part of the 2000s, around US 850 cents becomes the target.

Figure 2 repeats the exercise for the eastern 20 MPG. Note how the 20 MPG price in both currencies is remains well above the general price levels prior to 2011. In US dollar terms the 20 MPG is back to 2015 low levels. As with the 17 MPG, if support for the 20 MPG does not appear around US900 cents then the lows reached before 2011 become the next target.

Finally Figure 3 shows a similar analysis for the 28 MPG. In US dollar terms the 28 MPG looks particularly weak, as it has fallen below levels traded at during the past decade, and looks to be headed back down to levels last traded at in mid-2010. That implies further prices falls in the order o 8-10% to get the 28 MPG down to around US400 cents, before support turns up.

The unprecedented (at least in peace time) issue in this market is the lockdown of the supply chain at the retail level which is shrinking (quickly) the demand for greasy wool. We have the situation of a greasy wool market delivering wool for which demand has been slashed for an unknown period of time.

The supply chain needs some wool but not the supply coming onto the market at present. It is unknown for how long this situation will persist. In the interim some parts of the supply chain will require wool so supply needs to be maintained but at lower volumes. While normal volumes are offered for sale, prices will continue to be under downward pressure. 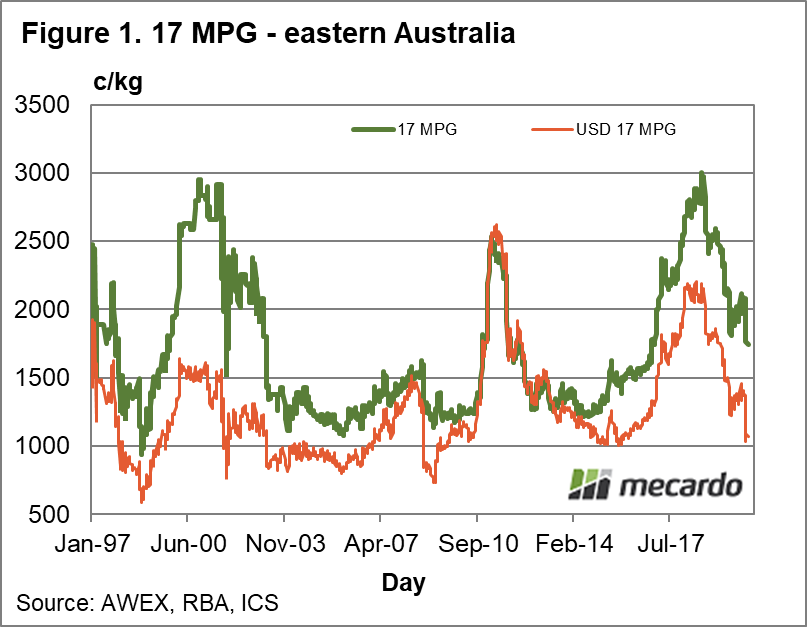 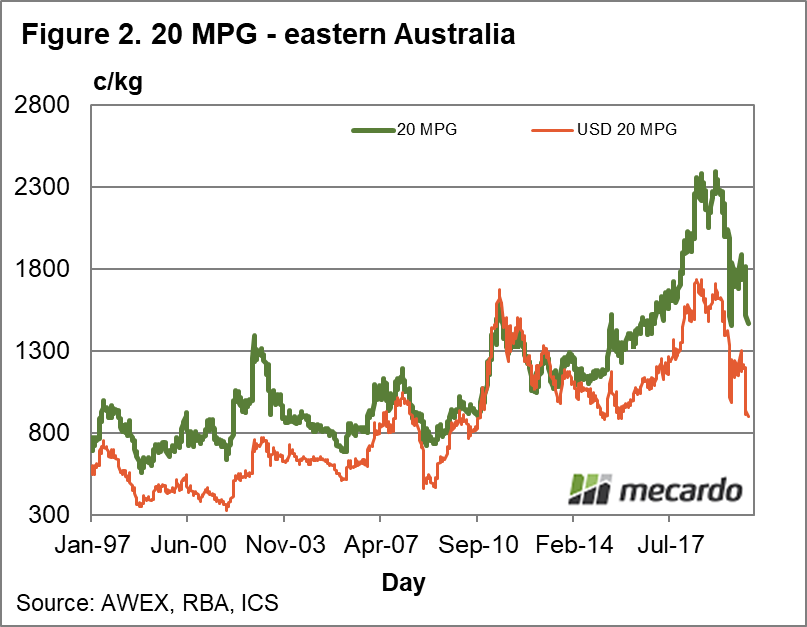