Last March Mecardo looked at drought patterns in wool specifications. 2019 did not end up being better than 2018 for many regions. The supply of wool specifications is reflected in premiums and discounts paid in the auction market. We can use our knowledge of seasonal conditions to understand changes in supply and through that, the likely changes in wool premiums and discounts.

Figure 1 shows the average eastern yield for wool sold at auction for 18 month periods beginning in January and running through to the mid-way through the following calendar year. The drought years of 2002 and 2006 are shown along with the average of 2013-2017 as a base to compare both 2018 and 2019 (the current year running to mid-2020). 2019 has consistently had the lowest yield compared to the comparison years, although the autumn of 2009 (following 2008) yield matched last week’s yield average.

Yield should reach a low for the season in March, especially given the recent rainfall which will spur some pasture growth and wash some of the dust from wool on the back of sheep. While the average eastern yield for the first week of March was 62%, in northwest NSW the average is more like 55% (up from 52% in February). By contrast in Western Australia the average yield last week was a buoyant 60.6%.

Figure 2 looks at eastern Australian vegetable fault (VM). Vegetable fault tends to have a longer lead time between seasonal conditions and VM levels in wool sold, and comes more from pastoral/northern regions. The recent run of drought years intuitively would indicate low VM levels in the clip. However Figure 2 shows that 2019 levels were not exceptionally low in relation to the 2013-2017 average. The seasonal pattern results in low VM levels around Christmas, with VM levels rising from early in the calendar year through to mid-year. In 2020 the VM level is starting at a low level, and given the two dry years preceding 2020 the peak VM level in mid-2020 should be modest.

As the article last year noted, staple strength does not have a particular drought pattern. In 2019 staple strength held up at good levels through to mid-2019 and then fell to relatively low levels from October onwards. Staple strength is likely to drift higher for the next quarter and then fall as the effect of early 2020 rainfall in drought affected regions is reflected in the wool staple.

From a wool market perspective, low yield will become less of an issue as 2020 progresses, vegetable fault should remain at relatively low levels but staple strength is shaping up to be a big issue in the first half of the new season (2020-2021). There is likely to be a delayed effect in the greasy wool market from reduced retail sales. Keep this in mind for lower strength wool from mid-2020 onwards. 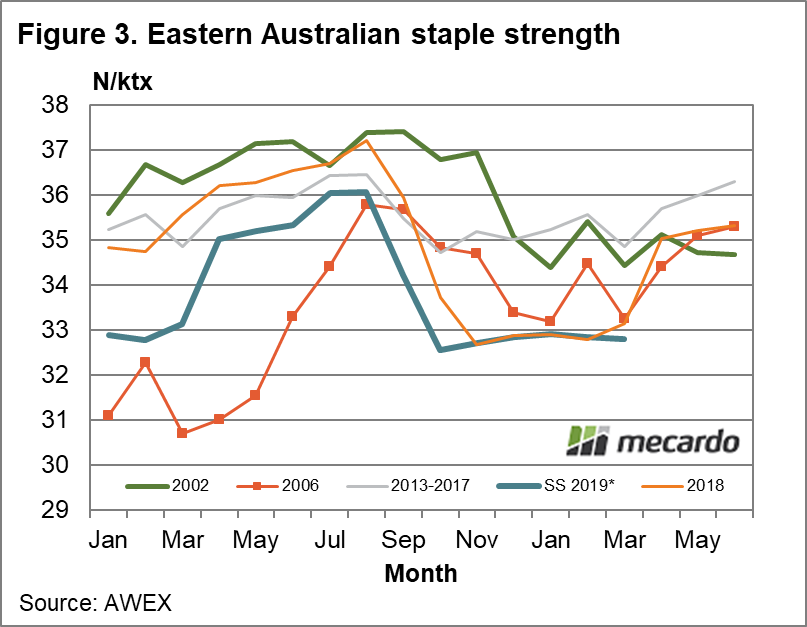