The Eastern States Trade Lamb Indicator (ESTLI) lost ground again, dipping 19¢ (2%) to finish at 808¢/kg cwt on Thursday's close, down from 827¢/kg last week. The ESTLI is now around 7% below the peak of 888¢/kg reached in early January.

East coast lamb yardings last week plunged by 14%, bringing numbers on offer to a level 7% below that seen a month ago. However, at only 4% below the level seen at the same time last year, and given we are tracking at volumes on par with the five-year average, lamb supply in the auction markets at least can still be considered strong.

Last weeks’ East coast sheep yardings also slipped, but to a smaller extent, at a 4% reduction week on week, but is still operating in line with the five-year average.

Lamb slaughter came off slightly, shedding 2% from the prior week, but at only 8% below the 5-year average, and 7% below this time last year, supply continues to be relatively plentiful.

Sheep slaughter dipped 16% on the week prior, but with sheep kills 9% below last year, and over 25% under the 5-year average, sheep are still very tightly held.

All eastern states trade lamb prices fell this week, driving the ESTLI lower again.  Restocker lambs in NSW lost just 4¢(<1%) but held on to the highest indicator title across the country, sitting at 989¢/kg. In contrast,  Western Australian restocker lambs were decimated, plunging a massive 117¢(14%) to 731¢/kg cwt, but all other WA lambs, apart from light lambs advanced 10-28¢.

In Victoria, Lamb prices were depressed across the board, with light lambs, in particular, nose-diving by 57¢ (7%)  to settle at 804¢/kg cwt.

Both Lamb and Sheep yarding’s are roughly tracking historical five-year patterns at present, so we can say with some confidence that further reductions in offerings as we go further towards winter will continue, providing some support to the market. Sheep slaughter in particular is operating at historically low levels, which bodes well for providing continued assistance to the mutton price. 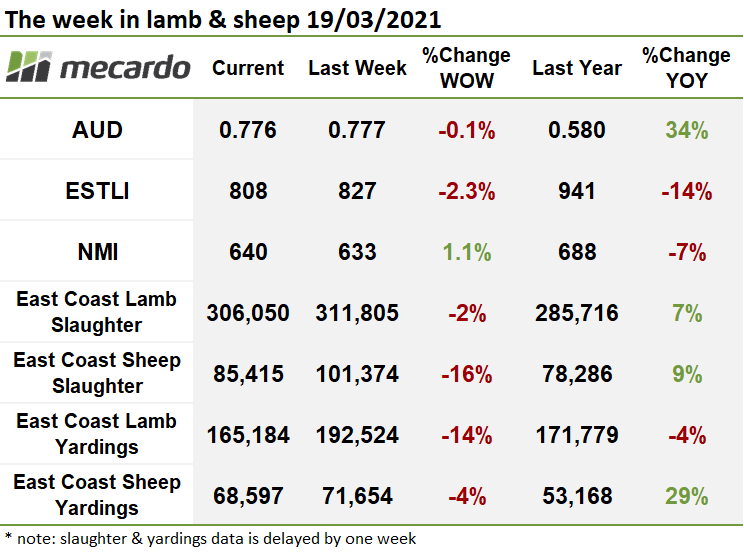 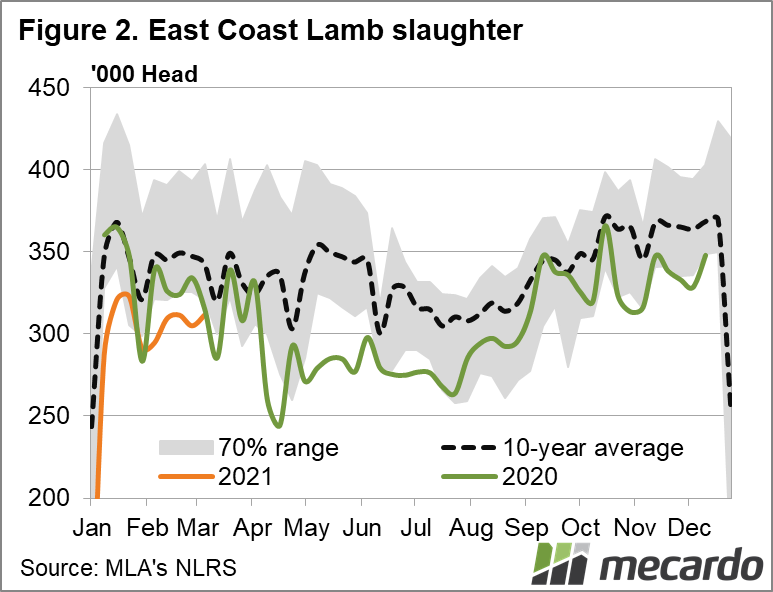