June lamb exports were well ahead of last year in total, and this should come as no surprise with 2020’s processing capacity suffering in the winter months in Victoria.  In addition to being 37.5% higher than 2020, this year June lamb exports were also 26% stronger than the five-year average.

Higher lamb exports obviously require higher slaughter, and we have seen that during June, with plenty of old season lambs coming to market late and heavy.  This has seemingly suited the US market which had its biggest month for Australian lamb imports on record.

In June Australian exporters sent 7,842 tonnes of lamb to the US (figure 1), a 73% increase on last year, and a new record.  The previous highest month for lamb exports to the US was in March 2019, and this June beat it by 11%.

Figure 2 shows that while Australian lamb is much more expensive than this time last year in US terms, it has been hovering around this level for much of the year.  The increasing demand from the US, as indicated by higher volumes at the same price, can be put down to tight domestic supplies in the US.

The latest Steiner report on US lamb, which is a month old now, was reporting tight supplies of both fresh lamb due to processing restrictions, and frozen lamb in storage.  US lamb prices in South Dakota in April were 78% higher than last year, at just over 1300ȼ/kg cwt in our terms.  For a 24kg lamb this is $320 per head, making our lambs look cheap.

Mutton exports were higher than last year in June, again with better processing capacity being a driver.  The three largest markets, China, Malaysia and the US all took around 30% more mutton than last year.

Figure 3 shows that despite the increase on 2020 mutton supplies remained very tight in June.  It was the lowest month for exports since last July, and at only 55% of the seasonal peak seen last October.

Stronger lamb demand from the US, and for mutton in general are no doubt helping drive prices higher during the current winter supply lull.  It is good news for growers that lamb exports in June could be high, while prices maintained what were historically strong levels.  This means the market might be able to cope with increased supply, without prices falling too far.

Export markets can soak up extra supply, as long as processing capacity can keep up.  This is of course very dependent on US foodservice markets remaining strong. 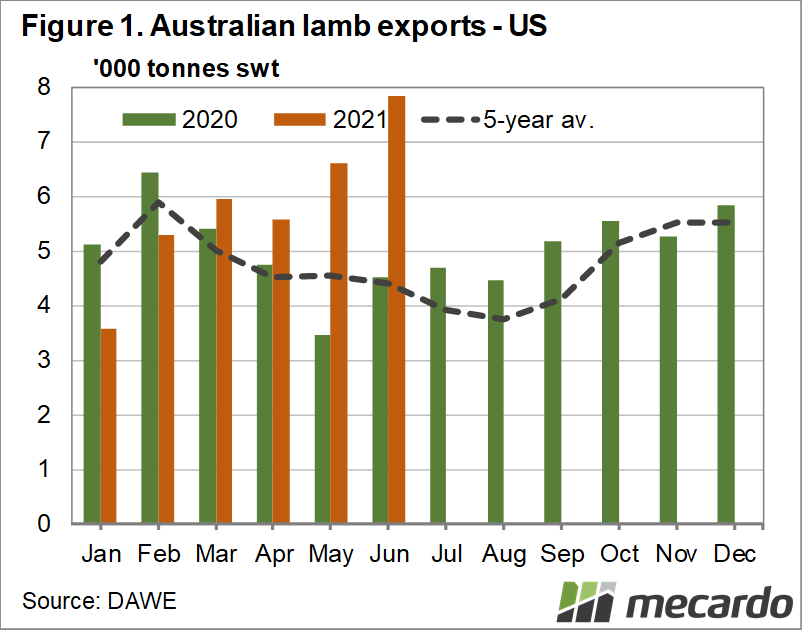 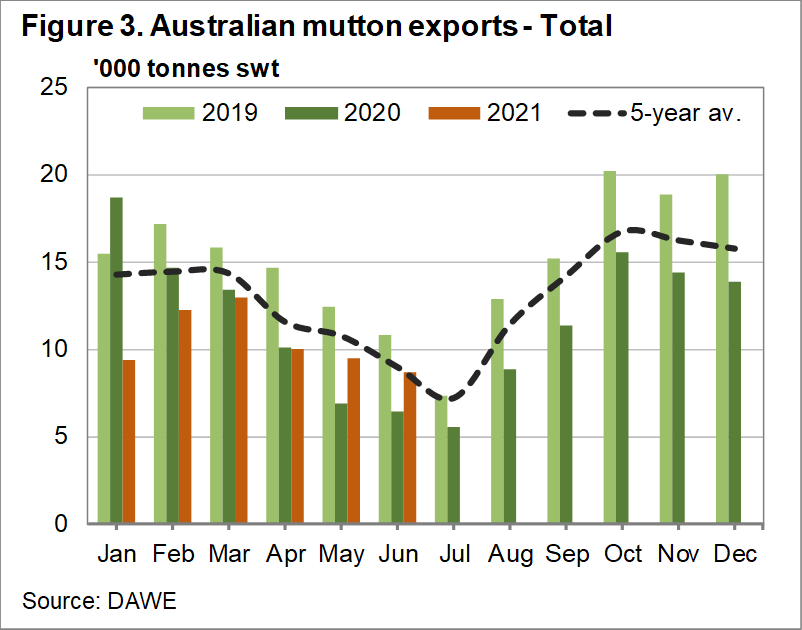