It seems like we have been writing about extreme breeding ewe values and whether they are worth the money for years now. And it continues this year, with records being set at annual first cross and Merino ewe sales. So here we go again.

The last time we looked at this it was $440 per head scanned in lamb first cross ewes, which, in hindsight were very good value.  The same ewes could now be sold in the high 300s, having produced at 1.5 lambs.

The last couple of weeks has seen Victorian and South Australian 18 month old first cross ewes making over $400 per head. Prices are quoted as being $50-$100 above the same sales last year, which were achieving record prices at the time.

There are a few ways to assess the value of ewes.  Many will quote the fact that cast for age ewes are making up to $200 per head, which means replacements are ‘only’ costing an extra $200.  Another way to look at it is the payback time, which is a good way to compare buying first cross ewes with cheaper Merino ewes.

Figure 1 shows some rough numbers for buying 1.5 year old first cross and Merino ewes. There are a lot of assumptions, but both types of ewes come in with a payback time of just over two years.

From an economist point of view, ewes look like a reasonable investment.  The costs of running a ewe will be different on every farm, but if we assume a cost of $100 per ewe for everything including feed, vet and death costs, we can calculate a return.  To work out the total income we have included $150 for a cast for age first cross ewe, and $120 for the Merino.

Figure 2 shows the very rough return calculations for the life of a first cross ewe, and a Merino ewe.  Based on current prices the first cross ewe will return 3.9% per annum, while the Merino will earn 2.5%.

With interest rates at extreme low levels, the returns from buying expensive sheep look relatively attractive with the modest production assumption used here.  There is plenty of upside in wool prices, and some in lamb prices which would make the returns look more attractive.

If we lift the first cross ewe price to $600 per head, it pushed returns under 1%. For Merino’s the maximum comes out at $370 per head.  These levels offer some sort of limit for price upside, but it doesn’t look like prices will get there. 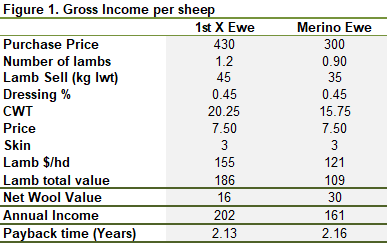 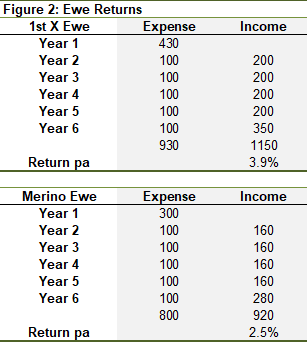