The EYCI climbed to a new record level this week- now almost nudging the 800 ¢/kg mark, and has never been higher since the index started. A strong surge in restocker prices is yet further indication that we are most likely in the swing of a herd rebuild, and all other categories have been caught up in the rising tide.

East coast yarding’s increased 3% on last week, driven by lifts in NSW and QLD of 12% and 8% respectively, but offset by a 20% decline in VIC.

Overall, yarding’s rising by 957 head on last week saw 37,459 cattle yarded on the east coast for the week ending 2nd October, which is 27% below the 5-year average for this time of year.

Slaughter numbers fell 5% from last week, making a partial reversal of the sharp lift we saw last week, bringing us back below levels seen at the start of last month. VIC and NSW were responsible for the majority of the slowdown, reducing throughput by 13% and 12% respectively.

The EYCI saw a respectable rise for the first time in a while, lifting 19¢ (2%) to finish the week at 795 ¢/kg cwt. The big news though, this is a new record level not only for the year, but of all time.

The optimism was well represented across the categories this week with another board full of green ink, with restockers continuing their dream run up, and heavy steers getting back on the bandwagon, after taking a stumble last week. The price premium of young cattle over finished heavy steers just keeps widening though, which; as angus brown pointed out in his last article, (view here), this is a strong sign that a solid herd rebuild is well underway. When store cattle get relatively expensive like they have been for the last six months, this market feature has historically persisted for up to 18 months.

Feeder and processor steers benefited, but not as much, adding 4¢(1%) and 2¢ to respectively close at 411 ¢/kg lwt and 414 ¢/kg lwt. Over the past month though, both have shown a slow but steady increase to consolidate a comfortable margin above the 400c mark. Vealers bucked the trend, losing 8c (2%) to finish the week at 424¢/kg lwt, coming back to month ago levels.

The Aussie dollar drifted sideways, inching up a fraction to 0.717 US.  The 90CL frozen cow price was a disappointment however- despite the stable currency situation, it lost 10¢ (1%) to finish up at 652¢/kg swt, indicating some weakness in US export market prospects.

The rainfall forecast for the coming week is looking more patchy, with only a relatively light drizzle expected across most of the eastern seaboard at best, with southern VIC getting the best of the rain. Historically speaking, Yardings tend to fall in mid-October, and so does slaughter –  so we might have both weaker demand and tighter supply coming up, but high prices being paid for restocker cattle may just tempt more sellers out of the woodwork. 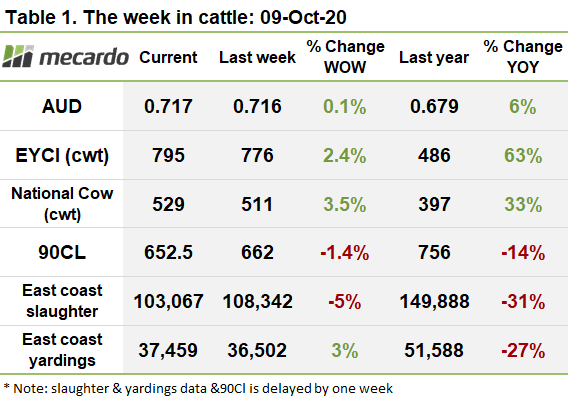 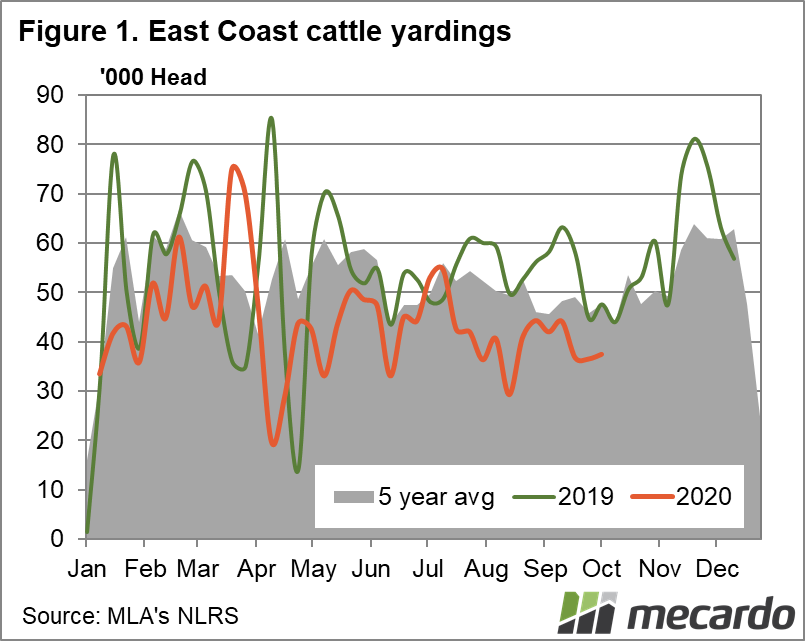 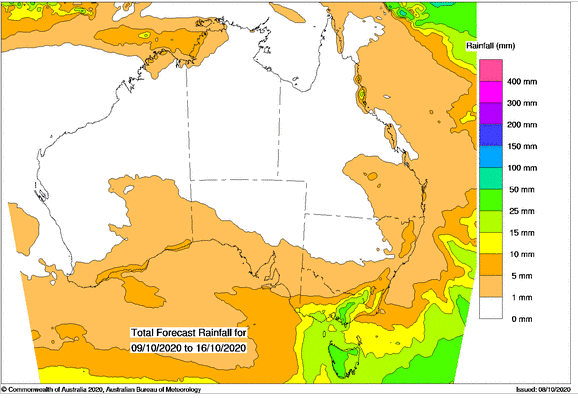