The EYCI was smashed well below 1000¢/kg cwt this week, and there it stayed, weighted down by a surge in supply this week. The rest of the market also suffered substantial losses in another horror week with all categories firmly in the red zone.

Slaughter statistics for week ending 8th July, 2022 were down 2% week on week, with falls of 3% in QLD and 6% in NSW offset slightly by a 5% increment in VIC throughput.

Official yardings numbers for last week ending 8th of July clocked with a massive 48% week on week reduction, driven primarily by QLD and NSW numbers, which were down 66% & 38% respectively. The underlying cause was the heavy rain last week which pushed numbers down considerably in multiple selling centres.

Eligible yardings numbers for the EYCI this week were up 75% week on week, returning to the levels exhibited in the last few weeks with 13,145 head on offer. Restocker steer numbers also surged 200%, as did medium cows by 251%, which yarded the highest number seen in the last month.  All these factors add up to be suggestive that this week was characterised by massive influx of supply, with cattle returning to market. Yardings for this week were most likely north of 40,000 head, but we will see how it panned out when the numbers are released next week.

Last week’s soft level of yardings caused by excessive rain clearly provided the EYCI with a temporary reprieve from the solid downward trend, with the sharp spike in supply this week pushing the index down 28¢(3%) back to triple digits at 977¢/kg cwt. Steers traded at 1030¢/kg at Roma store, 984¢/kg in Dalby, and 1024¢kg at Wagga.

In the west, the WYCI didn’t escape the carnage, losing a massive 107¢(10%) week on week, with the 20% reduction in eligible yardings not sufficient to provide much support in the current environment. A sharp fall in the proportion of premium priced vealers week on week from 83% to 68% dealt the main damage, along with vealer steer prices falling 7% to 1,133¢/kg cwt.

The National cattle indicators were a sea of red, with all specifications following the trend downwards. Heavy steers took the heaviest losses, plummeting 16% to 367¢/kg lwt, while medium cows held up well to book a 4% loss to 303¢/kg lwt considering that eligible yardings this week, at 2026 head were a solid 55% higher than any point in the last month.

The US frozen cow 90CL price slipped back 2¢(<1%) to 268¢US/lb, and lost 2¢(<1%) in Aussie dollar terms, closing the week at 865¢/kg swt, with the falling Aussie dollar providing support. Steiner reports that the US griding beef market remains soft, with concerns about ongoing demand, and sufficiently high inventories keeping prices subdued. Higher than usual supply emanating out of NZ for this time of year has also helped keep a lid on prices, with the only bright spot for Aussie exporters being the steadily depreciating dollar, which is providing support to the competitiveness of our offering.

Last week’s slightly more buoyant market in the face of lower yardings because of inclement weather, followed by this weeks crash, was yet another lesson that the level of supply far outstrips demand at this time of year. The trend is clearly one of prices heading south, particularly for poorer quality lines. There is no real indication that supply will back off substantially anytime soon, especially as the falling prices encourage producers to run for the gates. 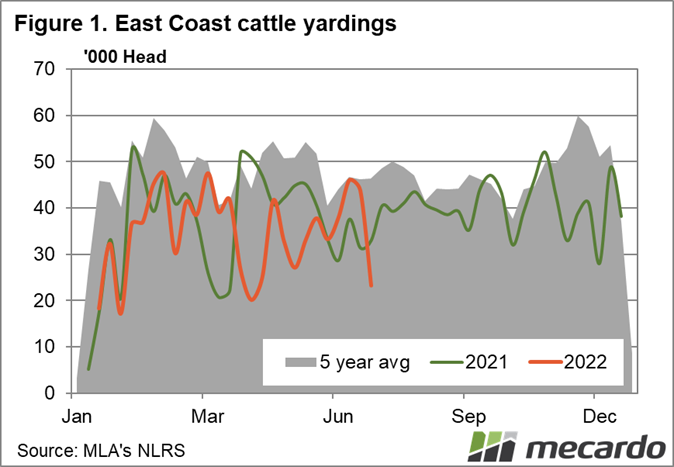