EYCI falls along with restockers

Last week the Eastern Young Cattle Indicator (EYCI) was nearing the $12 mark, but this week it’s closer to $11 – down 72¢ or 6% to 1119¢/kg cwt. With one less sale of day this week and as Meat & Livestock Australia (MLA) reported, ‘weaker QLD restocker demand’ took effect, the market softened for many of the indicators.

AuctionsPlus last week reported ‘a steady rise in offerings’, but also the first signs of some ‘buyer caution evident through the young steer lines.’

Demand from the north was relatively softer this week. Roma Store for example, contributed 2,875 head to the 7 day-rolling EYCI average, down from 3,741 the week prior. Average cattle prices unusually went down in tandem – from 1303¢/kg cwt last week to 1141¢/kg cwt this week. Roma store was still the top contributor, with 34% of the 7-day average, while Wagga was 2nd with 12%, with the other larger saleyards well below their ‘normal’ contributions.

Over in the west, the Western Young Cattle Indicator (WYCI) has coincidentally fallen by the exact amount as its eastern counterpart, down 72¢ to 988¢/kg cwt.

The National Indicators were mixed, notably, Restocker steers reversing its’ seemingly endless upward trajectory, albeit only slipping by 0.9% from 749 to 742¢/kg lwt, driven by a -1.5¢ fall to the Queensland restocker. The Heavy steer & Medium cow indicator both fell 2 & 11¢ to settle at 446¢ & 340¢/kg lwt.  All other indicators lifted, with the standout being the Medium steer indicator, jumping up 20¢ to finish this week at 498¢/kg lwt.

The Steiner report from the US reported ‘spot supply remains limited’ and ‘ongoing supply chain issues continue to pressure prices higher’ as evident in the 90CL beef price last week which shot up past the 900¢ mark in AUD terms. This was a climb of 12¢ on the week prior to 902¢/kg swt, despite a 2.1% fall in the Aussie dollar to 0.703US.

While the EYCI fell from its perch this week, international demand for Aussie beef shows no signs of slowing down, as tight supply and logistical issues continue to put pressure on global trade. 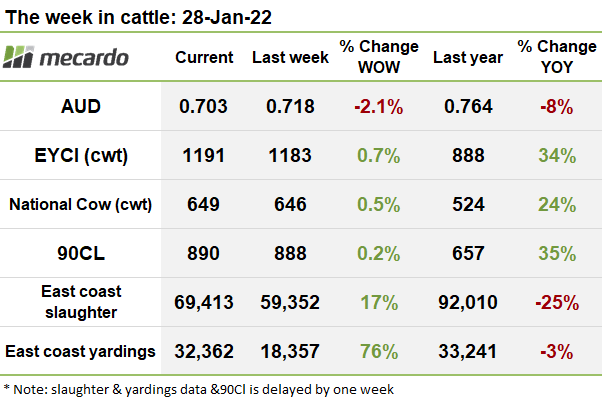 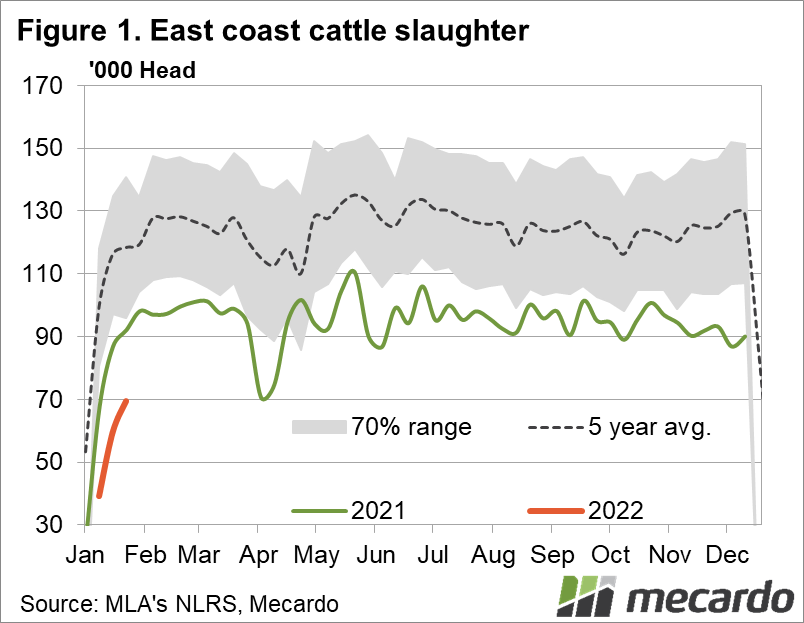