After reaching a new all-time high last Thursday, the Eastern Young Cattle Indicator ran out of steam momentarily early this week, before reverting back to 913ȼ/kg again. With the Aussie dollar losing ground against a strengthening US greenback, and the outlook on the season still very positive, not to mention strengthening US beef prices, slaughter demand may get some extra puff in its sails in the coming months.

East coast yardings just kept falling last week, (figure 1) plunging another 18% from the already suppressed level of the week prior, notching up a total 26% reduction over a fortnight since the JBS troubles began. The main culprit for the reduced supply was NSW, which clocked a cumulative two-week 30% fall, followed by QLD, at 27% while the reduction in Vic was less severe at 16%. That said, a sharp dip of 27% driven by NSW and QLD in mid-June is fairly typical in a historically seasonal sense, so there’s a good chance that the recent JBS issues failed to significantly spook sentiment among producers at all.

A total of 33,187 head were yarded on the east coast for the week ending 11th June 2021, down 7,274 head from the week prior. Online, at AuctionsPlus, 11,661 head were yarded, down 6% on the prior week, with clearance rates for all steers continuing to track at 90-100%, particularly for lighter offerings. Slaughter bounced up a solid 14% last week, in line with JBS’s return; with QLD lifting 27% week on week, albeit offset by a 17% reduction in the Victorian kill (figure 2).

After stumbling down as low as 902ȼ/kg early in the week, the EYCI returned to the record high set last week of 913ȼ/kg cwt. The national categories mirrored the strength in the EYCI, with restockers and processor steers in positive territory, despite falls in heavier, grown offerings.

The Aussie dollar plunged by 2% this week to 0.755US on the back of the US federal reserve indicating new intentions to ramp up interest rates in 2023 twice, which surprised the market. In addition, China has announced that it will begin selling down some of its stockpile of non-ferrous metals in an attempt to cool commodity prices, which, if it has an actual impact on the market may help alleviate upward pressure on the AUD from metal and ore export demand to some degree. However, with the latest Aussie unemployment rate coming in at 5.1% (comparable to pre COVID levels), the potential for rate hikes here at home to be brought forward has increased also, which has the potential to push up the AUD value in the future.

Despite the depreciation of the Aussie dollar, the 90CL only edged up a marginal 1ȼ to 771ȼ/kg swt; however, as Angus Brown pointed out in his article yesterday, NZ cattle slaughter and exports are still on a downward trajectory, and yet to bottom out till august, which will be supportive of 90CL for the next couple months.y

The week ahead has some solid rainfall of 25-50mm coming up down throughout southern NSW, and Eastern Victoria, and coupled with a favourable seasonal forecast from the BOM, most producers, especially those who are understocked are likely to be feeling confident about their feed position going ahead. The fall in the AUD, with potentially more to come, and rising 90CL prices in the US provide a positive backdrop of support in the coming weeks. 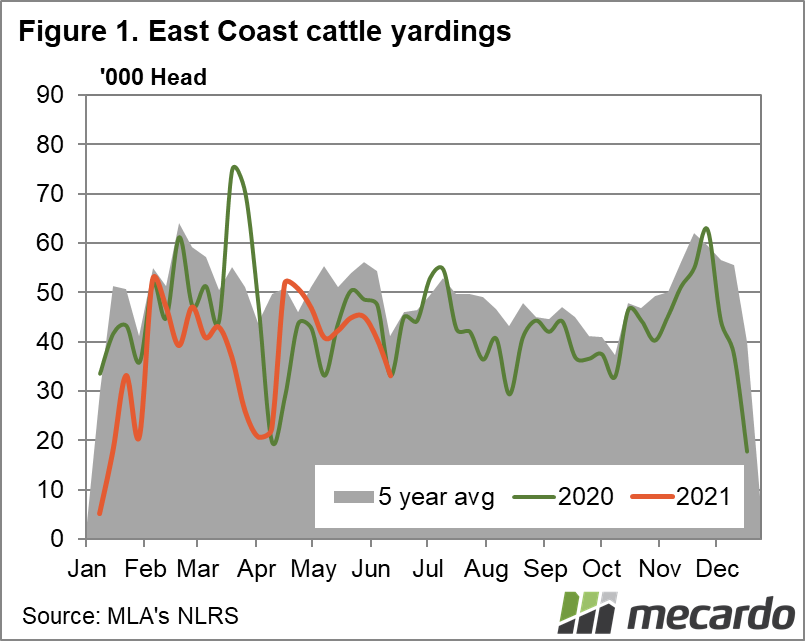 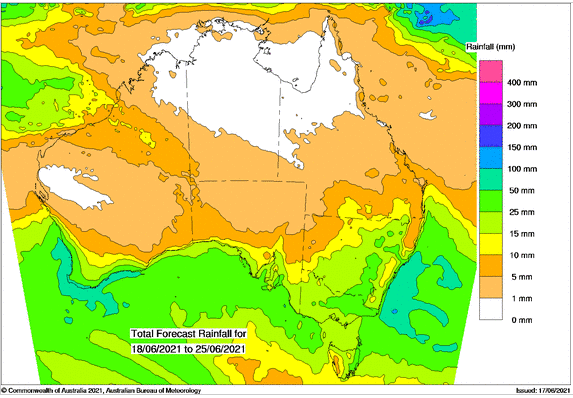