The Eastern Young Cattle Indicator broke the 1,100 cent mark this week, notching up yet another record. Back-to-back good seasonal conditions, with more rain on the cards, is fuelling producer confidence and pushing cattle prices higher and higher. Prices have also improved in the West with the West Australian Young Cattle Indicator sitting at 41 cent premium over the EYCI.

The Australian Bureau of Statistics released their Q3 cattle herd figures this week, confirming the Aussie herd rebuild phase has kicked up a notch. Mecardo looked more closely at the figures and it appears confidence in QLD is especially strong, as they hold onto more of their females (view article here). With plenty of cattle staying put in the paddocks, there are fewer heading to the yards, further driving up prices.

Yardings dropped by around another 10,000 head for the week ending 12th November 2021 for the second week in a row. Just 33,036 head went to the saleyards last week, 23% lower than the week prior and 35% lower than this time last year.

Slaughter levels dropped again with just 90,182 head of cattle slaughtered last week, 4% lower than the week prior and 18% lower than this time last year.

The perfect storm of tight supply + good seasonal outlook + strongnternational demand outlook pushed the EYCI to a record 1,102¢/kg cwt earlier in the week before dropping marginally to finish this week at 1095¢/kg cwt, 32% higher than this time last year.

The top four Saleyards contributing to the 7-day rolling average reported by MLA were Roma Store (14%), Dubbo (13%), Gunnedah( 9%) and TRLX Tamworth (5.5%). It was Roma Store  that helped push the EYCI into record territory again. Average prices there were a whopping 1,230¢/kg cwt, lifting 7.5% on the week prior or by 93 cents.

Reports from US Steiner Consulting Group of US importers struggling to secure beef orders due to extremely tight supply coming out of Australia, drove the 90CL price up nearly 5% on the week prior to where it sits now at 854¢/kg swt in AUD terms.

With plenty of rain about, supply will continue to be limited, to the frustration of buyers. While we don’t know whether prices can push any higher,producers should be confident that prices won’t fall drastically in the short term and thus should be well rewarded when they decide to sell. 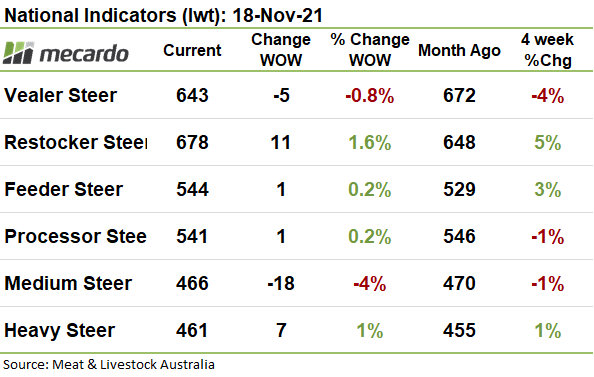