It should come as no surprise to see Australian beef exports open the year much lower than 2020. With slaughter levels taking a dive early in the year, there is less beef available to export, and it seems the US market is bearing the brunt.

The US has taken the biggest hit in terms of volumes.  In February the US took half of what it took in February 2020.  This is a good indication that cow slaughter is down, with much of the beef exported to the US being lower quality manufacturing beef.

Japan also had a 25% fall in volumes of Australian beef, which can be put down the fewer numbers of cattle on feed, and lower grainfed cattle turn off.

South Korea was the only country to really maintain its import volumes compared to last year, down just 7%, while China took 30% less beef.

Figure 2 shows Australian beef exports value, along with the 90CL Frozen Cow Export Beef Indicator.  The beef export value only runs until December, and it is the total export value divided by total exports.  We can see that the export value in ¢/kg terms managed to maintain its high level in the second half of 2020 despite falling 90CL prices.

Figure 3 shows that export values in $/kg to the US were very strong late in 2020.  Value must have been propped up by higher value exports to the US.  There are plenty of reports that grassfed beef is finding traction in the US.

Lower export volumes are a factor of falling slaughter.  With the lower slaughter coming largely from a decline in cows, the beef being exported will be higher quality, which explains some why export values defied the 90CL decline in late 2020.

Exports are likely to remain low in 2021, and export values strong.  It is of some concern that export values haven’t lifted from 2019/20 levels despite the extreme low supply.  When the data for early 2021 comes out we might have seen a rise, and it will be needed to maintain cattle prices. 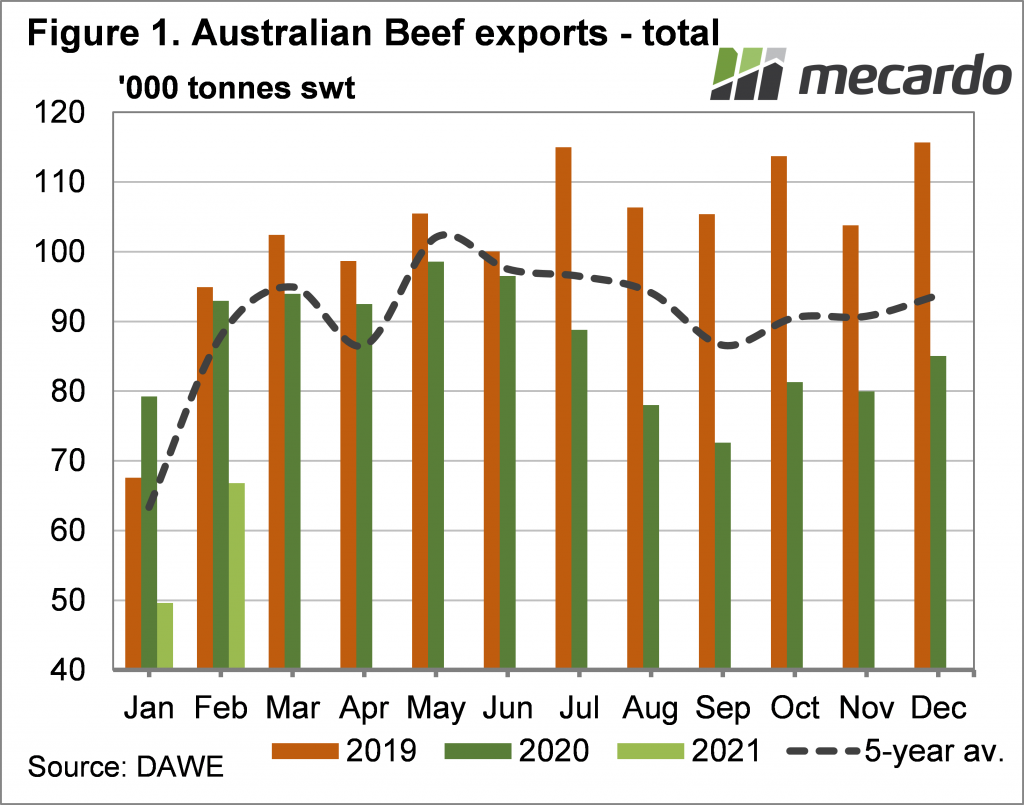