Farming in a war zone

This article will look at the impacts of the war in Ukraine on production and export potential. The information is from Masha Belikova, a Ukrainian market analyst and Mike Lee, a UK analyst who specialises in Black Sea production.

While much of the market’s focus has been on the impact of severed supply routes and access to one of the world’s major exporters, the cost to the winter crop and yet to be sown summer crops, is still being assessed.

Upwards of 98% of the country’s wheat and rapeseed (canola) are winter varieties and sown last Sept/Oct.  These will emerge from dormancy over the next couple of weeks – which this year is delayed due to a prolonged cold spell.  The winter wheat areas are concentrated in the southern and eastern part of the country with another swathe of country near the port city of Odessa in the west.

An overlay of the winter cropping areas and the conflict zones suggest that 43% of the crop is in contested territory.   Ukrainian farmers will have resourced much of their inputs prior to the conflict escalating, however the logistics of field operations in a war zone, especially diesel supply, could see reduced paddock activity.

Pre-war, Mike Lee (Green Square Consulting) estimated wheat production at 27mmt.  In the event that only some of the fertiliser and crop protection inputs could be applied, this would see production drop (in the conflict zone) to 70% of potential.  If the war were to drag on, impacting harvest activity, it is possible that production could drop to 60% of potential or 16mmt.  Domestic consumption is around 7mmt.

The spring sown barley, sunflower and corn crop is even more in the spotlight.  While much of the seed and crop protection inputs have been sourced, most of the fertiliser would normally have been imported from Russia or Belarus.  Diesel remains in short supply and you can only imagine the logistics of getting spare parts and labour.

Spring barley accounts for 50% of the total barley area and can be sown towards the end of March.  Sunflower, corn and soybeans will be sown towards the end of April –  so there is still time to manage the logistics of getting those crops in the ground if war were to stop soon. However, should the conflict drag on, 43% of the country’s sunflower cropping area and 36% of the corn area is in active conflict, potentially having a devastating impact on the ability to get the crop in.

The focus for Ukraine will be to make sure they can harvest enough to meet domestic demand.  The export program for the 2021 season was largely front ended, so Ukraine had executed much of their export business before the invasion.  Some 6mmt of wheat remains to be exported.  Some exports are still being made via rail through Poland, but at a maximum of 20kmt a day, this supply chain is much slower.

Russian strategy appears to have changed gear.  Instead of the ‘blitzkrieg’ Putin had hoped would sweep away resistance, the Russians appear to now be waging a war of attrition.  If this is the case, it poses a significant risk to the spring plant in Ukraine and therefore ensures the risk premium stays embedded in the wheat market (as well as corn, canola and barley). 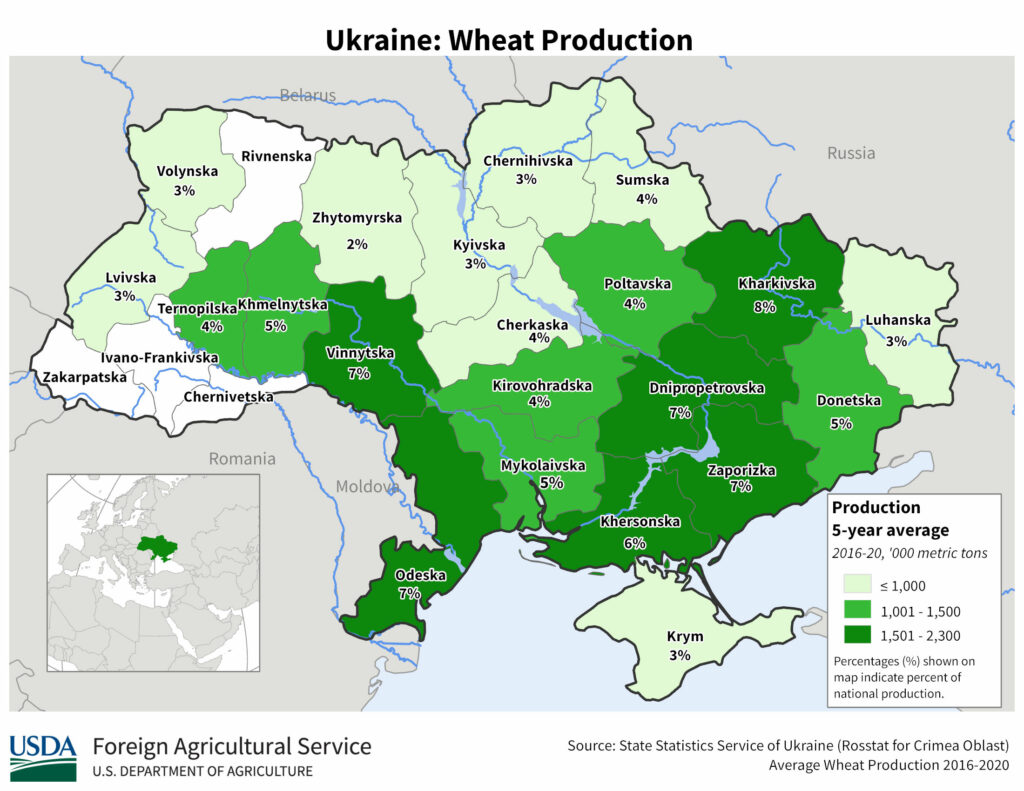 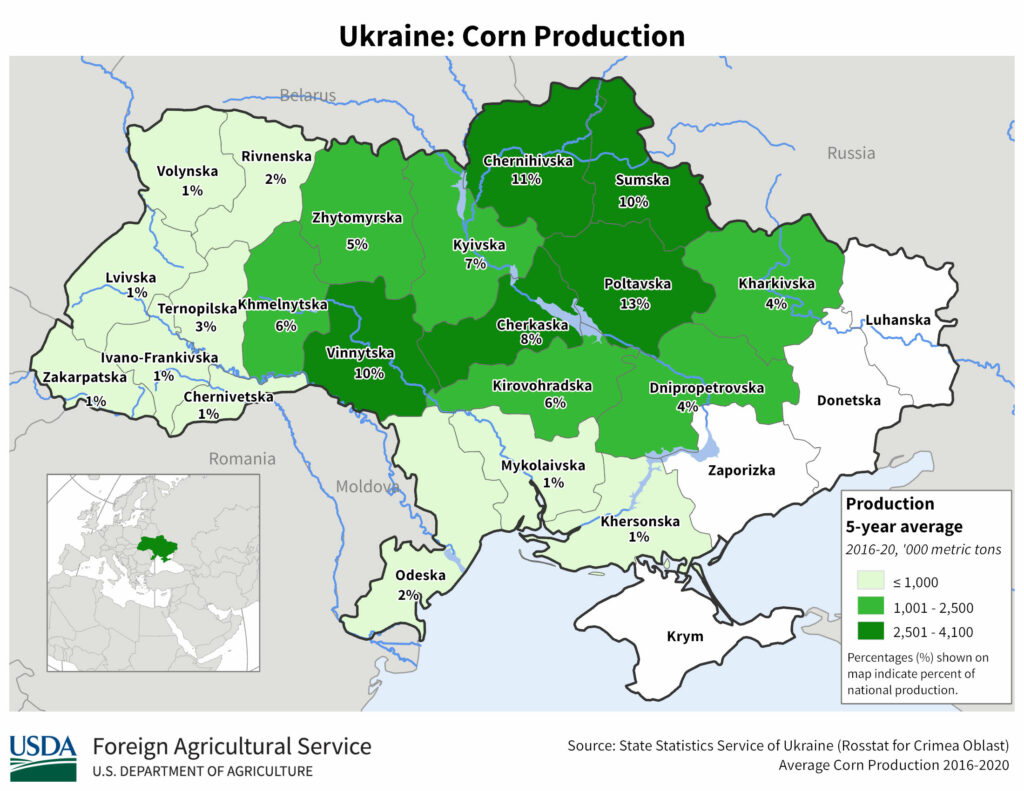 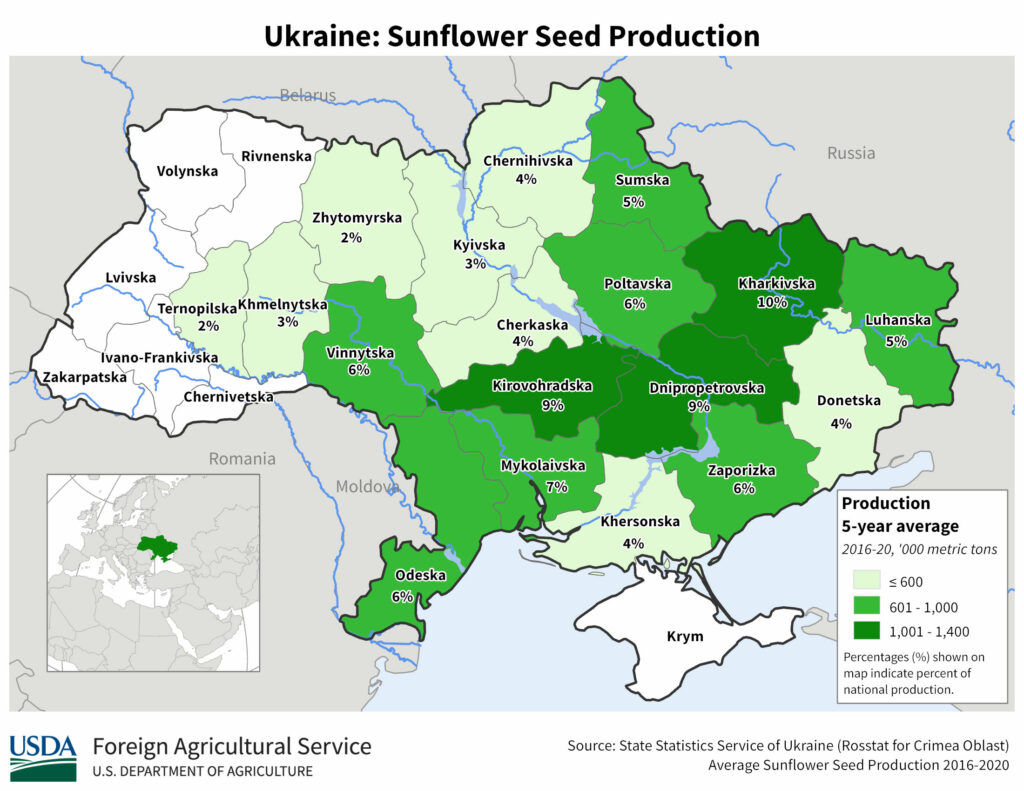