The Eastern Young Cattle Indicator (EYCI) continued to soften from its record highs of late January, with what appears to be a surge in supply from the north. Monsoon rains have been falling in QLD and with more forecast for the coming week, this may have initiated producers to get cattle to sale while roads are still accessible. The 90CL continues to show improvement having reversed the COVID- 19 induced downward move to remain on its recent upward trajectory gaining another 1.5%.

The improving 90CL prices are important for the future competitiveness of Aussie beef, as the re-stocker led rally in the cattle price is making things very difficult for processors trying to sell product and make a profit.

Yarding’s for last week jumped up 153% on the previous week, in a recovery of the record low yarding’s of the previous week. While increases were seen in all east coast states, the big numbers came from Queensland & NSW finding an additional 23,000 head.

While Restocker steer prices continued to pull back from the heady prices posted over the southern weaner calf sales period; giving up 11¢ for the week, most other classes were steady to slightly improved.

Cows destined to processors were off slightly, with the National Cow indicator pulling back 1.7% or 9¢/kg cwt, however, this was offset by increases in medium & heavy steers lifting by 1 to 2¢.

A feature of the drought was the female slaughter rate (FSR), with the percentage of FSR sitting above 50% for the past three years as breeders responded to dwindling pasture by destocking. The latest data is yet to be released, but we can expect this ratio to fall based on the strong demand for cows & heifers purchased to be sent back to the paddock at sales now.

MLA reported that the top price on AuctionsPlus this week was for light weaner heifers making 915¢/kg lwt, while heavy cows produced the highest price at $3,820 per head. Other saleyards reported selected cow & calf units trading above $4,000 in a show of confidence by buyers in the future of beef prices but also the current season.

While trading of steers is important to ensure ongoing supply in the short to medium term for feedlots and processors, the rebuild of the cow herd post drought is vital for the longer timeframe.

It’s all eyes on the north as QLD & the NT look for significant rain events to complete the northern monsoon season. Good rains will not only constrict supply in the short term, they will ensure pasture conditions to finish cattle and reduce the need for store markets to absorb light un-finished cattle. 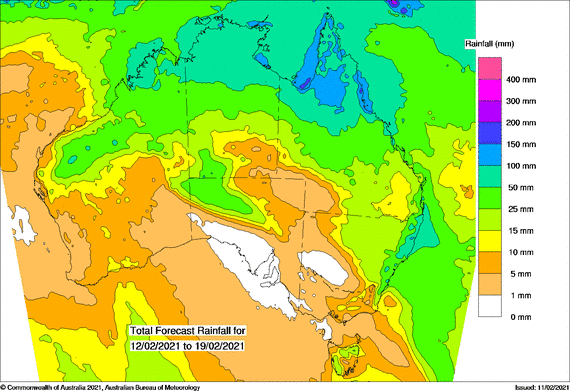