Lamb pricing has shown plenty of resilience since tanking back in the spring. While we are not back at the giddy highs of last March, it’s safe to say lamb pricing is pretty solid and profitable for growers. Not all lamb prices are equal however, and here we look for the sweet spot in growing out lambs.

Restocking lambs remain at the expensive end of the pricing spectrum.  Figure 1 show the NSW Restocker Indicator and the Eastern States Trade Lamb Indicator (ESTLI).  Restocking lambs are not quite at a record premium, but 16% is up there in terms of historical values.

The heavier the lambs get, the cheaper they become.  At Wagga last week, 22-24 kg lambs sold for an average of 894¢, 26-30kg lambs for 854¢ and 30kg plus lambs 787¢.  The Wagga market is stronger than those in Victoria hence trade lamb prices are higher than the ESTLI.

Figure 2 shows the curve for lamb dollar per head values against carcass weights.  The curve shows that taking lambs from restocker weights to light trades is hardly worth doing, gaining only $4 per head.

From 18 to 26kgs there is good money in growing lambs out, with little decline in ¢/kg meaning almost full sale value is gained for the extra kilograms.

The value curve flattens out after 26 kgs with the lower ¢/kg for heavy lambs meaning only $3 is gained for taking lambs from 26 to 28kgs.  Over the hook’s grids tell us the next step down in price is at 32kgs.  A 34kg lamb is not worth much more than a 32kg lamb.

Lambs are not sold individually, so it’s pretty hard to hit the sweet spot on pricing, but this analysis should give some sort of a guide for decision making.  Restocker lambs are good selling, but if they move into light trade territory, holding them to heavy trades will offer good returns. 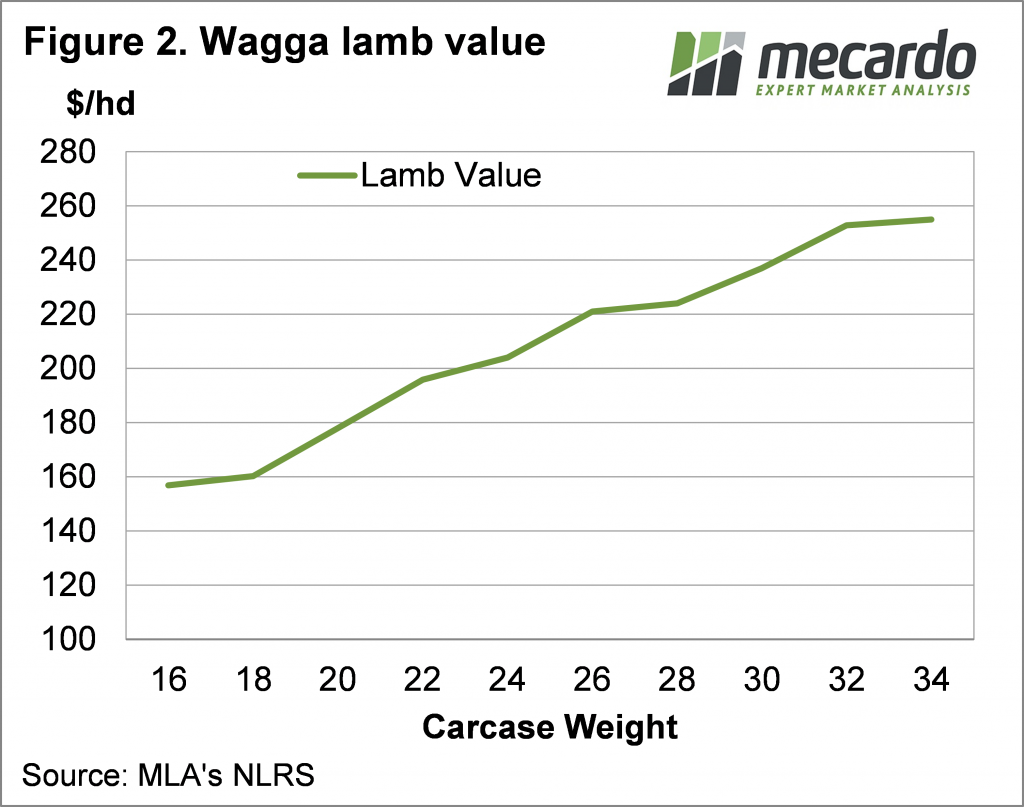