The greasy wool market covers a wide range of constituent wool markets ranging from the rarefied 12 micron wool, which is rarely seen at auction, through to the big 38-39 micron carpet categories of New Zealand. In the current market fine merino wool is outperforming its “wool cousins”. This article takes a look at fine merino premiums.

Fine merino wool however is trading at high premiums to medium/broad merino prices. Figure 1 shows the difference in price (effectively a premium) between categories 2 microns finer and 2 microns broader than the average merino fibre diameter from 1982 to last week, in cents per clean kg. In addition the average merino fibre diameter is overlaid, to show how much the quality of the Australian wool clip has changed during the past four decades.

Figure 2 shows the price curve for average merino combing prices by micron for January, split into non-RWS and RWS accredited lots. These two series are separated as RWS prices are significantly higher than non-RWS prices, on average. In Figure 2 the prices for 20.5 through 23 micron are relatively flat, with only 93 cents difference across 2.5 microns. Below 20.5 micron the prices rises steeply, reflecting the high premiums shown in Figure 1. As well prices fall away when the micron becomes broader than 23-23.5 micron.

Fine merino premiums remain at high levels by historical standards. The question is how long will they remain at these levels. History suggests that after mid-2022 the current cycle of high fine micron premiums will be getting “old” with the implication of the risk of lower premiums. 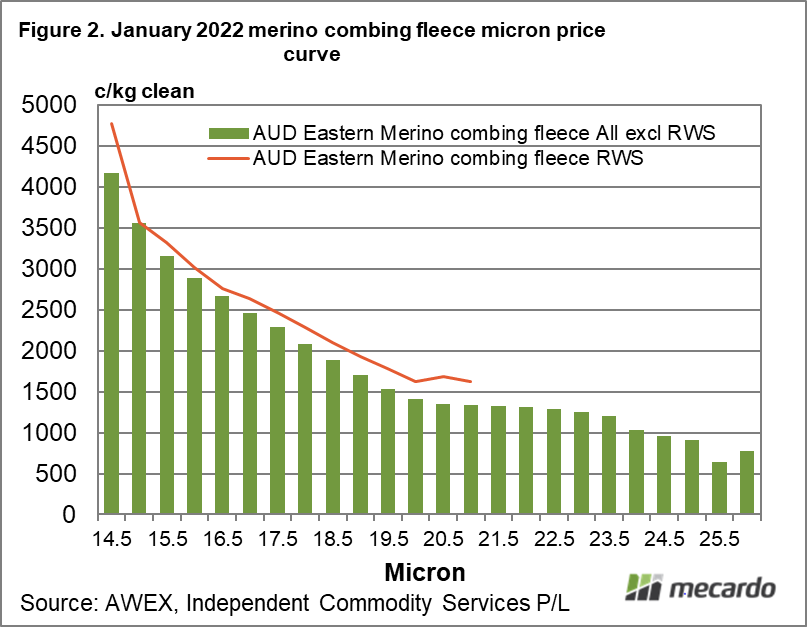