Amongst the turmoil of 2020, and there has been plenty, one part of the greasy wool market has been having a good run – fine Merino premiums. This article takes a look at where these premiums are in relation to past cycles.

In September Mecardo looked at the micron price curves for merino wool, showing how even cardings types were achieving substantial fine micron premiums. Fine micron premiums are heavily influenced by supply and the Merino (and crossbred) clip continues to broaden (last week’s article).

Greasy wool prices, generally, were at low ebb in September and have since bounced by 400 cents. Figure 1 looks at micron premium and discounts (with prices at 18.5 micron set to be the basis equalling 1) for a combing fleece average, merino locks and crutchings and merino fleece, pieces and bellies with a staple length 50 mm and less in December 2020 (to last week). In proportional terms the fine micron premiums have eased, due to the 400 cent rise in the base price.

Figure 3 shows the difference in price in Australian cents per kg terms for the series used in Figure 2. In absolute price difference terms the top of the cycles are more even, generally peaking in the range between 800 and 1000 cents per clean kg. The small 2008 cycle is the exception, where the cycle peaked briefly at 700 cents. In September the premium averaged 586 cents and in December so far it has average 678 cents, so despite the premium in proportion terms being stable it is still rising in cents per kg terms.

Given the clip is likely to continue broadening through to autumn, the supply driver of fine wool premiums will be still operating to widen these premiums for another quarter or so. This indicates the premium has a reasonable chance of reaching the 800-1000 cents range, which is not a bad performance for a year like 2020.

As changing supply is a key driver of fine micron premiums, it is hostage to an extent, to rainfall. How these premiums play out in the 2021-2022 season, depends on rainfall from now on. At this stage the premiums should continue to widen, at a slower rate, through to next autumn. 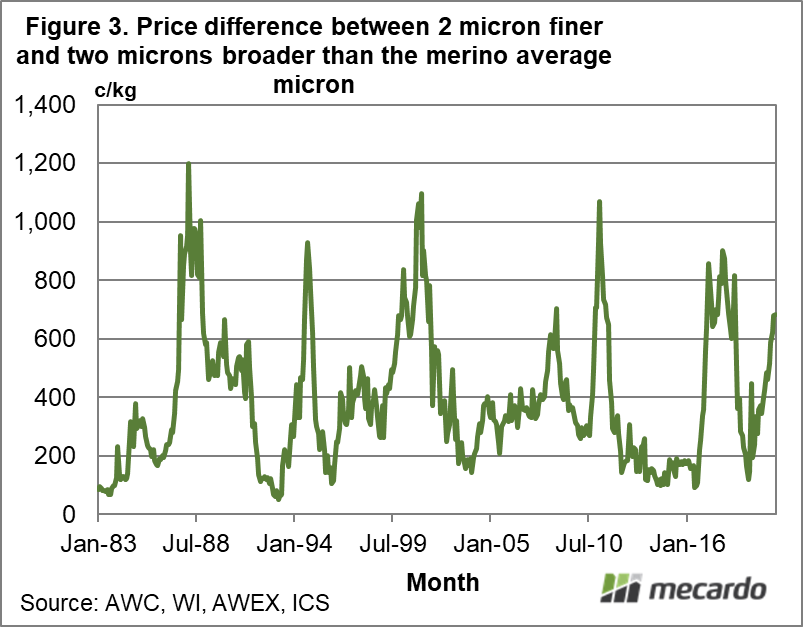