Feedback out of the supply chain continues to indicate that demand for knitwear is outstripping the demand for worsted wool. With this in mind this article takes a look at the current price curves and discounts for a range of fine merino wool types which are used in knitwear.

Knitwear tends to use raw wool which has shorter staple length (although this does vary) which means wool with shorter lengths and or lower staple strengths are suitable. This is markedly different to the classic “Italian” spinner style wool, generally with high staple strength, which used to sell for large premiums.

Figure 1 compares two price curves for merino fleece between 19.5 and 15 micron from the sale in the week before Easter. The base series used is an average of combing length fleece (with a staple strength above 30 N/ktx, vegetable fault below 2% and o subjective faults beyond light scourable colour – H1). The second price series is based on low staple strength (24 N/ktx) fleece. The bars (right hand scale) show the difference between the two series. Keeping in mind the data is drawn from only one week of sales data, it shows that there was remarkably little difference (less than 1%) between the two series between 15.5 and 19 micron.

The second schematic (Figure 2) shows price curves for 50 and 60 mm long merino fleece, with discounts to the base combing fleece series (from Figure1) shown by the bars. It shows the 60 mm length discount to be generally less than 5%, while the discount for 50 mm is much wider ranging between 10% and 20%.

Figure 3 shows the price curves for two merino pieces price series, one with a low vegetable fault of 2% and one with a higher vegetable level of 4%. The discounts shown are again compared to the combing fleece series. As would be expected the series with higher vegetable fault receives a larger discount, but only in the order of 4%. The discount for the lower vegetable level pieces is running at roughly halfway between the current discount for 50 and 60 micron length fleece shown in Figure 2.

Forward interest for RWS accredited fine merino pieces and bellies fits with the view of relatively strong demand for knitwear wool types. The schematics in this article show very small discounts to merino fleece for low staple strength and short-staple strength down to 60 mm staple length. Pieces and belly prices are pitched at the level of 50 to 55 mm length fleece. 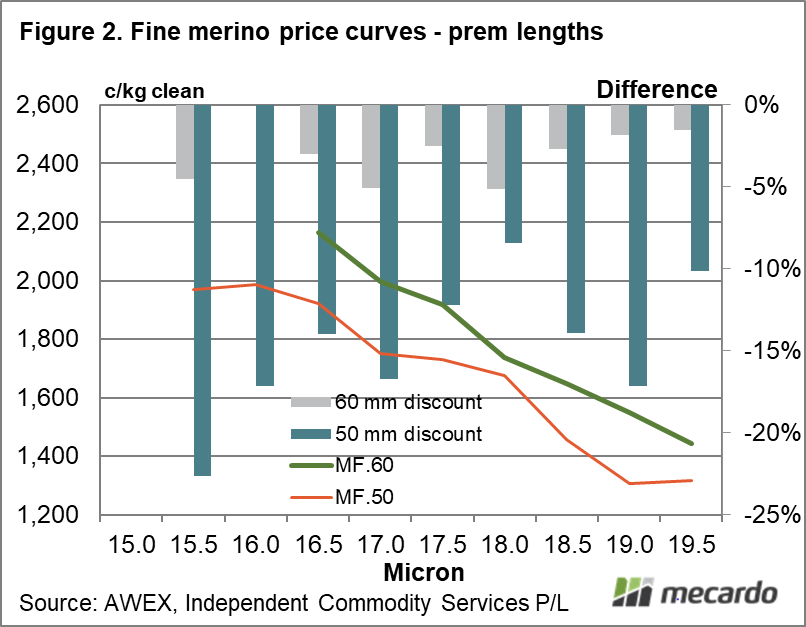