AWEX reported that the strongest buying focus was on good style merino fleece wools 18 micron and finer. While the market for the finer types ended in positive territory, support waned as the sale progressed, particularly for broader types.

The Eastern Market Indicator (EMI) improved 3ȼ for the week to close at 1,392ȼ. The Australian dollar was easier with the US/Au rate quoted at US$0.723. This resulted in the EMI in US dollar terms pulling back 5ȼ to settle at 1006ȼ.

Sydney benefited from the gains made in Melbourne on the final day of last week’s sales catching up to the Melbourne rates. The strongest gains were in the finer Merino fleece wools, with the largest gains made on the sub 17.0 micron wools. In Melbourne the 16.5 MPG lifted by 71ȼ & 67ȼ in Sydney, however the weaker support for 19 MPG and broader saw these types softer by 10ȼ to 20ȼ.

On Mecardo this week (view article here), Andrew Woods looked at the cost of shearing a sheep compared to the price of beer over time. Limited availability of shearers has allowed the shearing rate to increase, beyond award levels, helping to close to the gap to beer prices which had widened out during the past three decades. It is hard to entice people into the industry if they have trouble buying a beer!!

Next week another large offering is rostered with 46,490 bales listed with all centres selling on Tuesday & Thursday with Wednesday the Australia Day holiday. 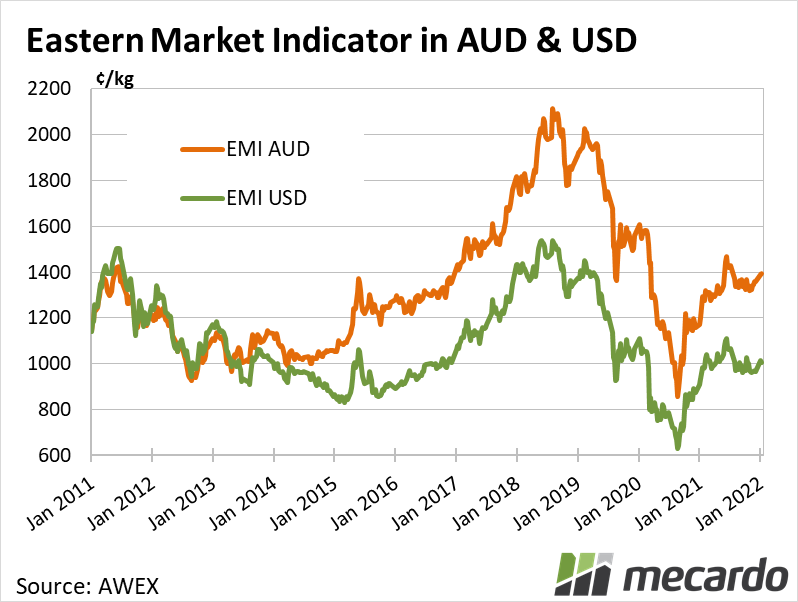