While apparel fibre prices, including wool, plumb new cyclical lows, fine merino premiums continue to increase. This article takes a look at fine micron premiums, taking into account supply which is a factor often overlooked when discussing changes in the price structure of the greasy wool market.

In early June Mecardo looked at micron premiums and discounts in the market, showing how supply is helping to widen the price differences between micron categories. Some of these changes have been unexpected, with the gap between the 19 and 21 micron categories actually narrowing during the past three months. The finer micron category premiums however, have continued as expected.

Demand tends to drive the dominant cycles and trends in the market with the COVID-19 pandemic effect on demand a classic example of this phenomenon. Change in supply tends to alter the relative prices of different wool categories. Think of vegetable matter (VM) discounts when there is a lot of VM in the clip or discounts for staple strength when staple strength is low and the associated mid-point break is high.

Rising fine micron premiums are helping to offset some of the fall in the overall market. For fine wool producers this then rules out the use of most hedging tools unless the micron category of the hedge instrument is close to the expected average micron of the wool to be produced. The rise in the premiums is a good example of how supply influences market premiums and discounts but not the overall trends and cycles of the greasy wool market. 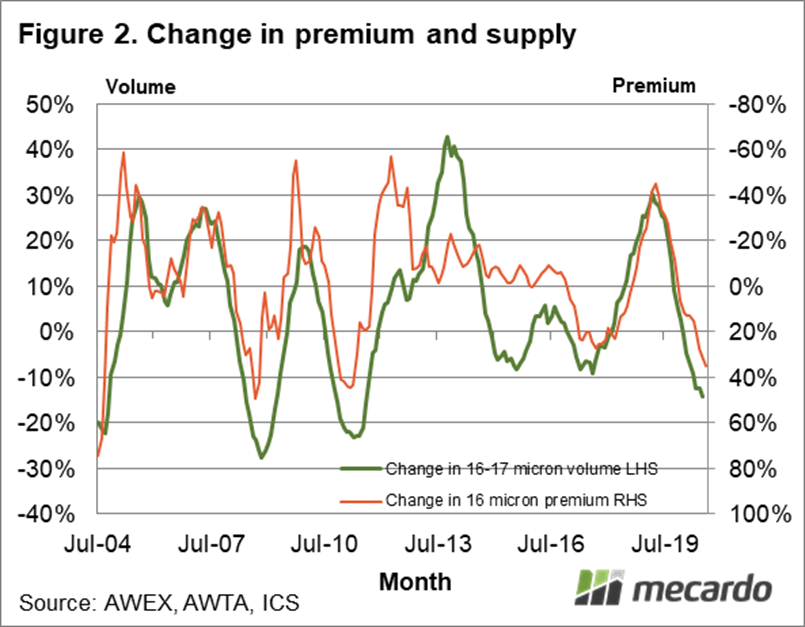