Flock figures on the rebound

Short supply will continue to offset global market challenges, created by Covid-19, in the short term, but the flock rebuild is certainly underway. Meat and Livestock Australia’s latest sheep industry projections, released this week, paint a mainly positive picture as all flock and production figures begin to grow - albeit at a slower rate than previous post-drought recoveries. And all signs point to preferable conditions for prices staying where they are, for the meantime.

MLA estimates the national flock numbers for 2020 were slightly higher than last forecast in September, at 64 million, a drop of 2.7 per cent from 2019, the lowest figures in more than a century. But they are also now predicting a faster restocking rate than their previous projections, forecasting the flock to jump 5.2% this year, to 67.3 million, and 17 % by 2023. This will take the flock back to a volume not seen since 2007-2008. How? Well, the turnaround in seasonal conditions in sheep producing areas of the eastern states meant sheep slaughter dropped an impressive 30 per cent for 2020, and is only forecast to increase 2% from there this year.

Our export volumes dropped in line with production in 2020, but once again are forecast to make back that lost ground and then some by 2023. Lamb production fell 5% in 2020, with export volumes in lamb dropping 6%, but both figures are forecast to grow more than that in 2021. Lamb exports are expected to grow 10% in 2021 to 290,000 tonnes shipped weight. If it eventuates, this will be a new annual lamb export record, surpassing the previous figure set in 2019. And its only headed higher from there, with MLA predicting lamb exports will continue to grow each year for the next three, increasing 25% to 331,000 tonnes in 2023.

Highlighting just how much domestic industry influences were directing the sheep industry ship in 2020 is the fact that all sheep and lamb indicator prices reached record highs at some point – except for heavy lamb. And the restocker lamb and mutton prices experienced the biggest improvements for the year, increasing 26% and 20% respectively – all restocker driven. Mutton production will be the only figure not forecast to increase in 2021, instead remaining at 2020 levels, which were 25% lower than 2019.

It’s very likely there will be more lambs on the ground this year, but if the weather pattern remains favourable to producers as is forecast, then both more ewes and ewe lambs will stay in the paddock – or return their after being sold for high values. The flock is no doubt on the rebuild, but it won’t happen overnight. If our short supply is teamed with some renewed global economic enthusiasm from the Covid-19 vaccine, prices should remain relatively close to where they are. 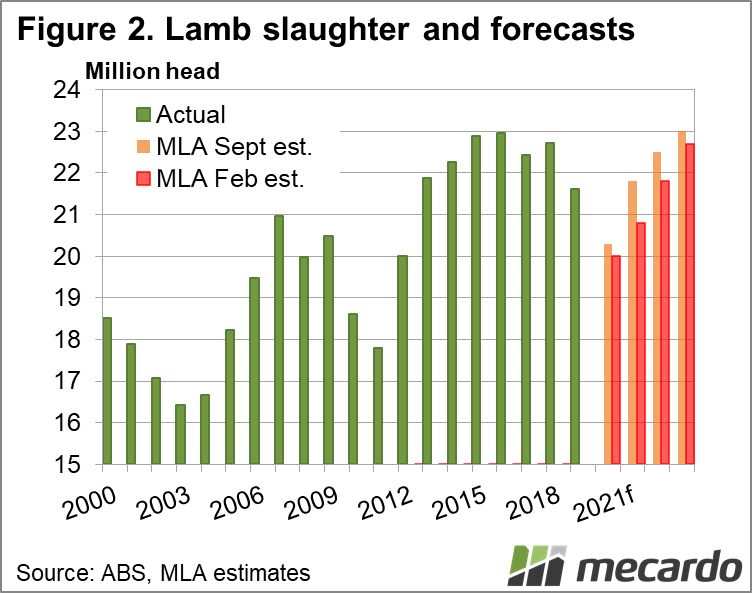 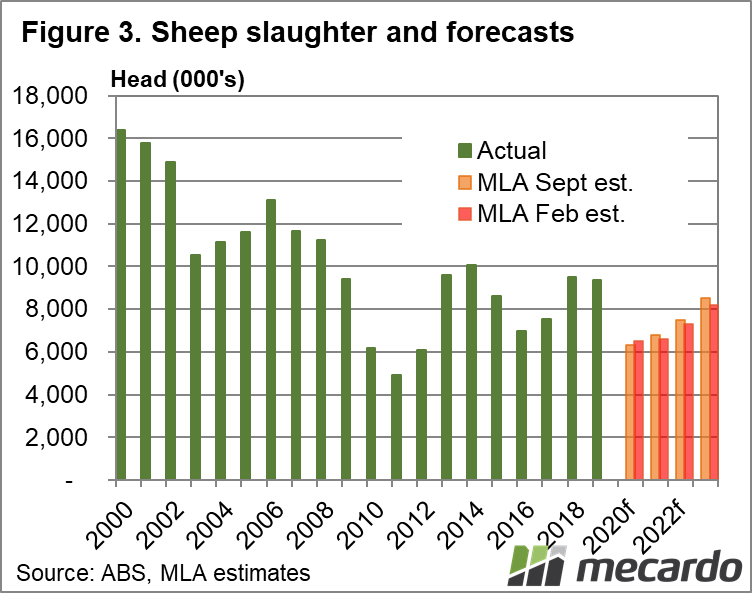