The big news this week was an outbreak of foot-and-mouth disease in South Africa, and in response China swiftly banned imports of wool from South Africa. Depending on the length of the ban, we may see some extra demand from China in the coming months which should help support the current the market. This week was a reversal of last week with stronger bidding for merino fleece types on the opening day of sales with lifts across all microns 22 & finer, followed by a fall in the final sale day for most categories.

The Eastern Market Indicator (EMI) fell for the fourth consecutive week, this week by 6ȼ to close at 1,369ȼ. The Australian dollar continued to strengthen up 0.64ȼ to US$0.7571, which pushed the EMI in US dollar terms up 4ȼ to 1036ȼ. In Euro terms, the EMI is at 951€, up 4 cents on last week. As mentioned in the Australian wool innovation market report this week, the AUD is at the strongest level against the Euro since April 2017, pushing the cost of wool for those buying in Euro 3.3% higher, highlighting the economic difficulties facing Europe currently due to the Russian war on Ukraine.

The Western Market Indicator (WMI) went the other way, lifting 3ȼ to finish the week at 1421ȼ. All indicators opened stronger in the west but lost most of their gains on the last day of sales.

Once again the market rewarded good style merino fleece with low vegetable matter, pushing up all microns 22 & finer between 5 to 30 ȼ, especially in Sydney, with the 18.5 MPG there improving the most, currently sitting at 1894ȼ/kg. AWEX reported that heavy rains across parts of the country have resulted in an ‘increase in the amount of unscourable colour and water colour appearing’ across selected wool lots.

Crossbred wools  had mixed movements on the opening day, with 28 MPG posting small gains while the 26MPG fell by 8ȼ. The last day of sales saw all crossbred wools either stay put or fall, continuing their downward trend from already weak prices. (figure 1)

The national offering this week remained steady on last week with 42,737 bales coming forward this week. The national pass-in rate was marginally higher at 13.9% resulting in  36, 811 bales sold, the lowest amount since the final sale of 2021.

On Mecardo this week, Andrew Woods looked at sheep & lamb offtake, commenting that low offtake this year, points to a further expansion in the Australian flock size. Earlier in the week he also took a look at how apparel fibres have been tracking in the face of higher oil prices, and what this means for wool.

Next week all centres are selling on Tuesday & Wednesday only again, with 48,413 bales rostered for next week. 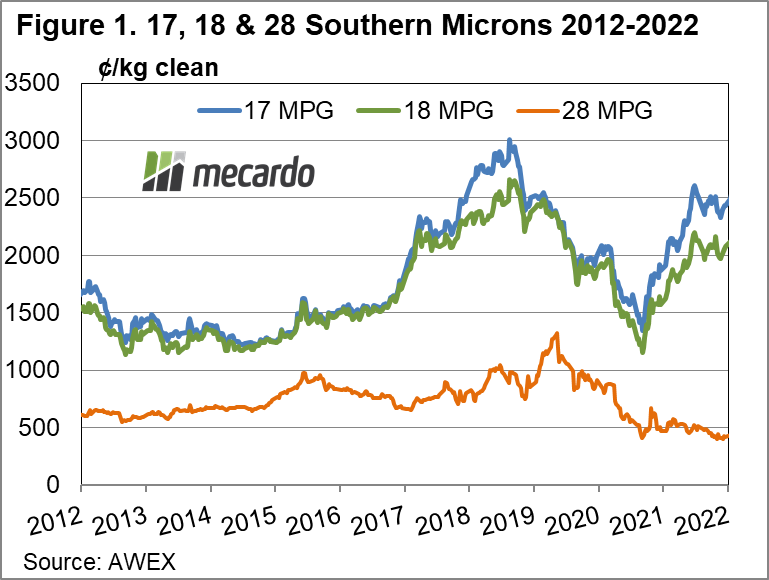 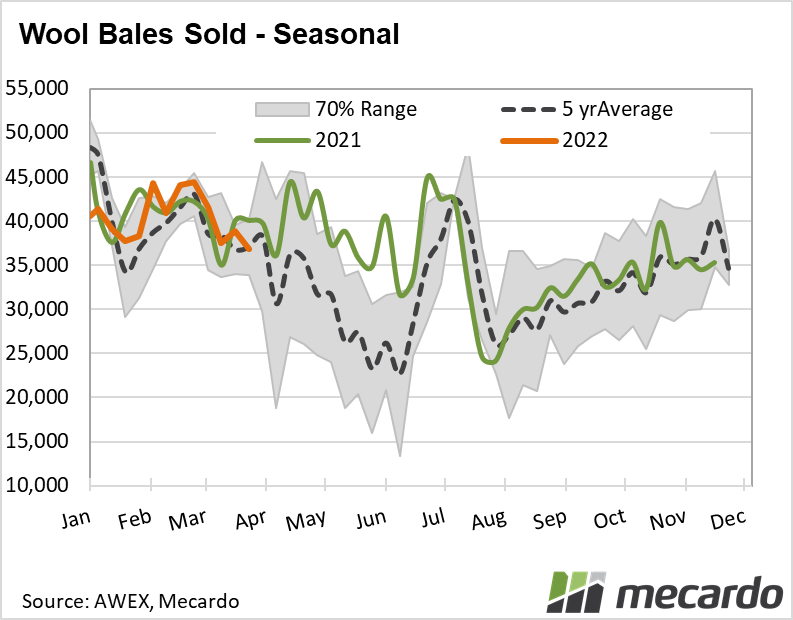