The February forecast for Australia’s sheep flock has been revised higher, with the rebuild expected to kick on this year. Meat and Livestock Australia’s tri-annual sheep industry projections released this week estimate the national flock lifted 10.8% year-on-year in 2021, with sheep slaughter, production and live export falling in line with this, while lamb figures bounced higher.

Flock numbers have built faster than first forecast in 2021, with MLA estimating sheep and lamb numbers to be at 70.88 million head as of June 30, up 11% year-on-year (compared to the 70.6 million estimated in October). And that growth is set to continue, with the flock to lift another 4.9% this year to 74.7 million head, its highest level since 2013 and an increase of nearly 14% on 2020, when the flock hit three-decade lows. Despite the flock growth, ABS sheep slaughter data has it totaling 5.45 million head in 2021, above the MLA estimate of 5.10 million. MLA expect sheep slaughter to build back to 6 million head this year, and climb 64% from 2021 to 2024, hitting 8.34 million.

According to the quarterly ABS data, also released this week for the October-December period, total lamb slaughter in 2021 hit 21.41 million head, which was 6% higher than MLA’s estimation for the year of 20.25 million lambs, and therefore about 8% above the 2020 volume. MLA’s lamb slaughter forecast for this year is now 21.6 million head (a 1% climb), down slightly from the 21.8 million predicted for 2022 in October, but they expect throughput to be up further to 22.6 million in 2023.

Lamb export future expectations were also lowered slightly since the October 2021 projections, but again they’re based off a slightly higher than predicted volume sent offshore in 2021. Lamb exports are estimated to total 283,000 tonnes shipped weight in 2021, which would be a record volume, and a 7% climb on the previous year. They are forecast to lift another 8% this year to 307,000, which is just below the 9% increase forecast for 2022 lamb exports in MLA’s October projections. Lamb production will hit a record high volume of 567,000 tonnes in 2023, after lifting 7% this year compared to last.

Total Australian Sheepmeat exports rose by 0.5% in 2021, and the value of those exports was up considerably more, 5.3% higher to equal $3.96 billion. This is despite total sheepmeat production for the year to be 1% lower compared to 2020, an estimated 630,000 tonnes carcass weight. This teamed with flock growth bodes well for the industry, with strong supply to support existing and new markets and the demand flowing back to producer returns. 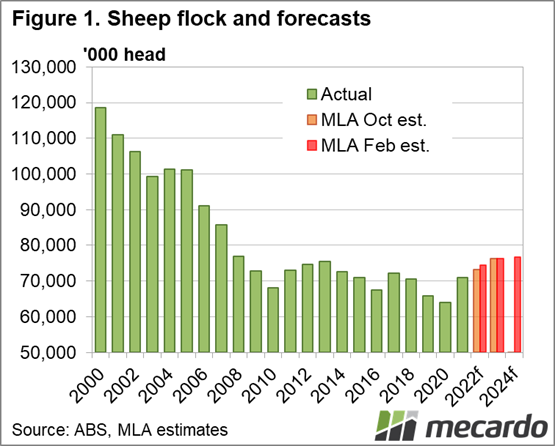 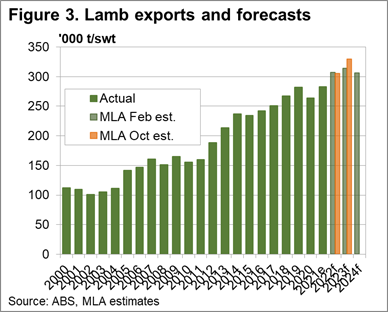