Forecast for yield recovery but there is a way to go

After two ordinary harvests in a row, it would be an understatement to say the 2020 crop is much anticipated. The Australian Bureau of Agricultural and Resource Economics and Sciences (ABARES) released its June Crop Report last week, and, at this stage at least, things are looking a lot more positive for production.

The headline numbers for the winter crop forecast is a surge in wheat production. On the back of a good start, ABARES are predicting a 75% lift in total wheat production (Figure 1) to 26.67mmt.  Planted area is forecast to lift 28%, with the rest of the increase coming from average yields rising 36% from 1.5t to 2.05t/ha.

The National increase in production is impressive and will be driven by NSW. Summer and autumn rains are expected to see NSW growers lift the area planted to wheat by 95% to 3.7 million hectares.  This is not a record, sitting at around the pre 2018 and 2019 average.

In NSW yields are expected to double, from 1.1t to 2.24t/ha, and the resulting increase in production will come in at 297%. The forecast production of 8.29 million tonnes will be the largest crop in NSW since the bumper of 2016 and the second largest of the last 10 years.

We know the Chinese barley tariff came a bit late to shift much of the planted area to other crops, but despite this barely plantings haven’t had the lift seen in wheat. The rise in barley production reflects this, with figure 2 showing a forecast for a 17% increase to the second highest level on record.

Again NSW is the main driver of the increase in production, with plantings up 55% and yields rising from 1.25t to 2.26t/ha. This is expected to see barley production in NSW increase 181% to 2mmt. WA is the biggest barley state, and they are expected to see area fall but yields rise, to produce 3.9mmt.

The good start to the cropping season also had an impact on canola plantings, with ABARES forecasting a 19% lift. Yields are expected to increase 17% from 1.16t to 1.37t/ha with the combination of plantings and yields, lifting production 40% to 3.25mmt (Figure 3).  NSW is again the main driver, with a lift in canola production of 257% to 803,000 tonnes, but South Australia is also improving 22% to 1.4mmt.

Canola has lost plenty of area compared to some the big years of the mid 2010s, and this might be what is helping relatively strong levels compared to international markets.

Yield forecasts made five to six months out from harvest are pretty unreliable, with seasonal conditions likely to add or deduct plenty of tonnes before harvest begins. Despite this, the forecasts do help drive markets and help explain the new crop price spreads to international values, which are the main driver of our price.

Little is likely to change with yield estimates over the next month or so, but medium-term weather forecasts will be closely watched to see if the potential currently out there can be achieved. 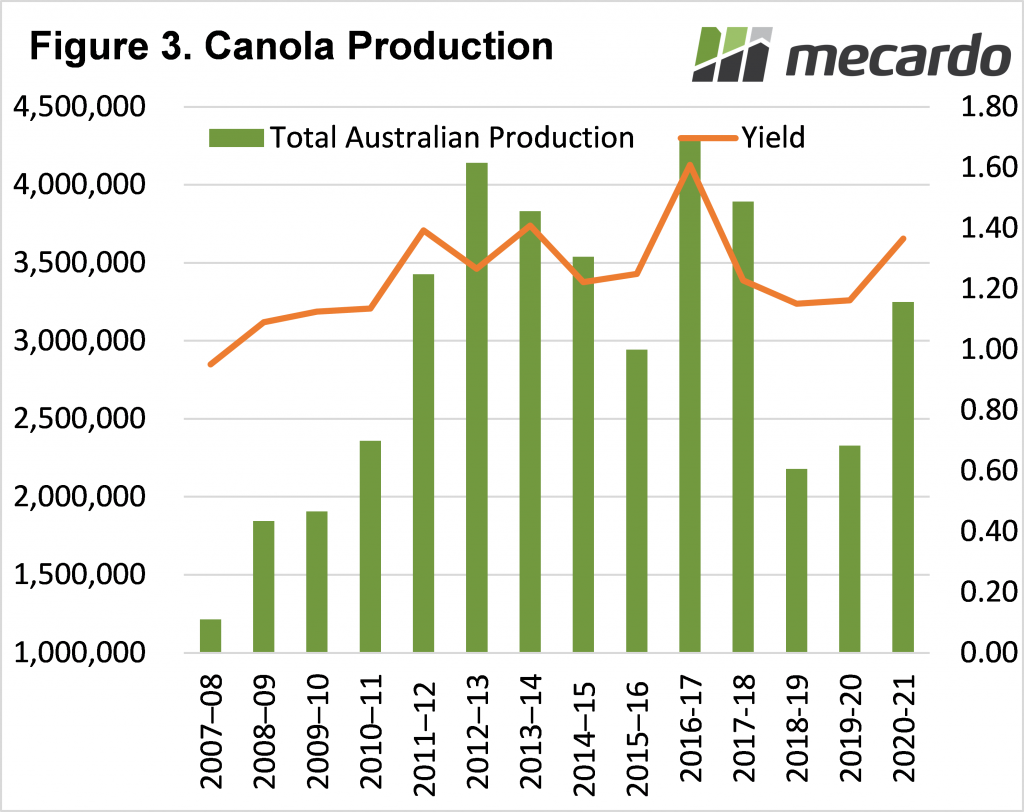