Cattle prices reached the moon a long time ago in many people’s minds, and now it looks like its headed for Mars. This week the Eastern States Young Cattle Indicator (EYCI) reached a new record high, and most other indicators lifted also. The gains are being made despite a backdrop of increased supply, so the demand is clearly there.

As we predicted in our last cattle comment, the delayed data release of slaughter numbers for last week revealed that they lifted 7% week on week, reaching 95,342 head. This is a good indication that cattle supply and slaughter trends will continue to fit the historical pattern of a big lift in November, so more increases in the coming weeks can be expected.

East coast yardings figures for last week also saw a sizeable increase of 23%, but again, the key observation is that prices also lifted last week and did not fall in response to the increased supply. This means that demand is currently strong enough to outstrip supply. Supply still has a way to go though, with less than half of the usual November run-up achieved so far, but it’s not looking like that is going to put a significant dent in prices at this stage.

The EYCI’s strength this week provides more indications of strong demand, as it rose 30¢(3%) to reach a new all-time high record of 1,068¢/kg. Eligible young cattle yardings rose 19% to 13,891 head, which is a good indication that we will see another big rise in yardings in the data for this week, when it is released. Given that prices lifted strongly on the higher yardings, there is no doubt that a hot plume of demand is pushing prices north. All the key markets posted solid results again, with average Roma prices pushing up 5.3% to 1057¢/kg, and Wagga Wagga hit a scorching 1,109¢/kg, in defiance of the dampening effect of having twice the offering in the yards compared to last week. Dubbo also saw a 4% rise to 1,082¢/kg, again, on double the yardings of last week.

The suite of National Indicators were a mixed bag this week, with Vealers notching up a huge 9% week on week gain, however, Processor and Heavy Steer’s fell 3%.

90CL frozen cow prices fell 18¢ last week to close at 814¢/kg swt, partially suffering from an appreciation in the dollar, with underlying US prices also slipping 3¢ to 272¢/lb. Steiner reports that logistical problems in the US continue to impact supply availability, and imported beef availability remains tight. A worrying development is that the US has removed Brazilian beef from the increased inspection list, indicating that the US is becoming increasingly open to Brazilian beef imports.

The Aussie dollar continued to improve in value, rising 0.6% against the US greenback this week to 0.747US.

With prices lifting, despite the downward drag of higher yardings, this is a strong indicator that there is red hot demand in the market that is continuing to provide support to prices going forward. Clearly the backdrop of another good season ahead, with La Niña looking more likely, combined with tight global beef supply stemming from ongoing bans of Brazilian beef by China are giving the market plenty of confidence. 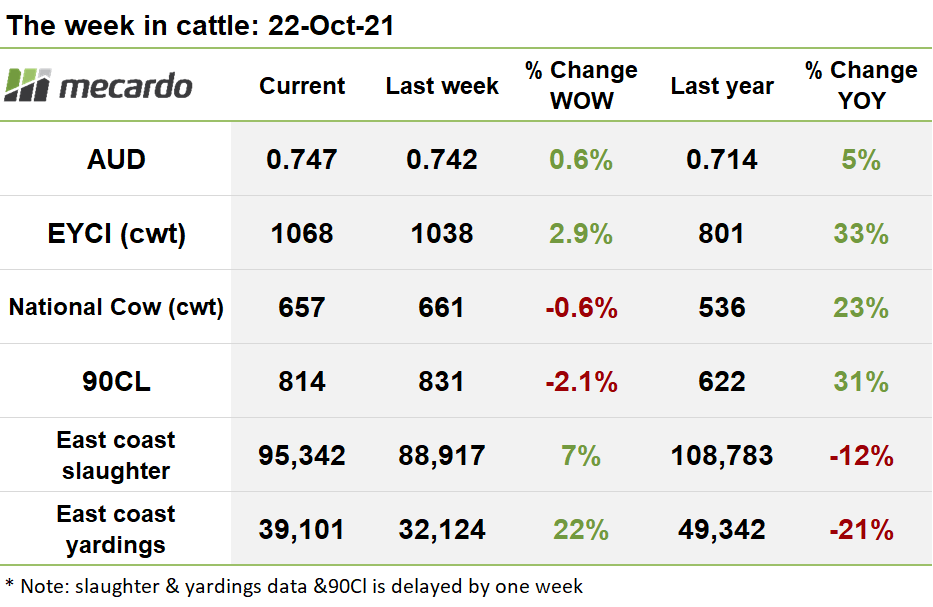 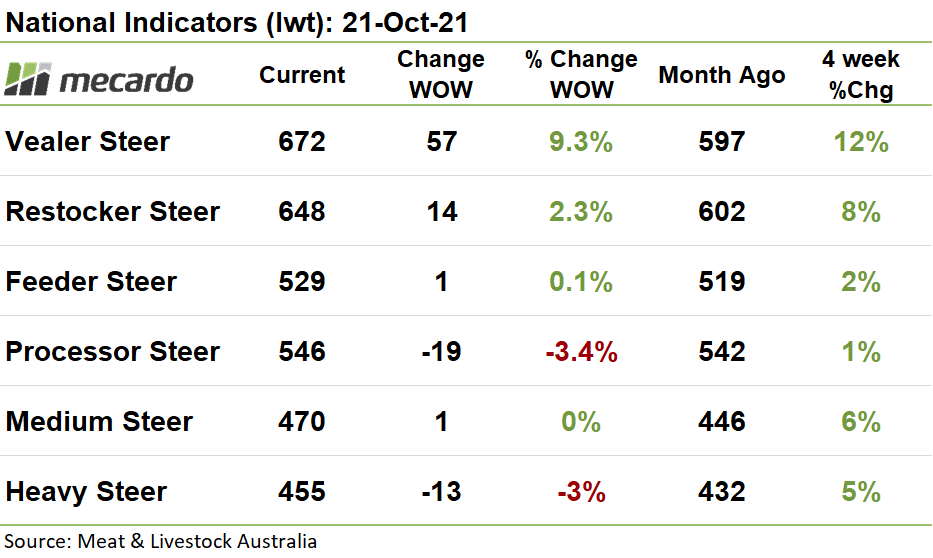