Fragility of the market exposed

The rally ended this week as the softer tone towards the end of last week translated to a full-scale retreat from the beginning of sales this week. While the end of last week trend was an indicator of what was to come, a significant jump in the offering was the final straw. To balance the ledger, the final sales of the week (notably a strong finish in Fremantle) were the best with the market support lifting prices, so perhaps this is the “correction we had to have”?

The Eastern Market Indicator (EMI) fell, losing 81 cents after rising 102 cents last weeks to close this week at 1138, a 6.6% decline for the week. This puts the EMI market rally since the beginning of September (at what appears to now be the low) at a 9.8% gain, with the EMI gaining a net 102 cents over an 8-week period. The AUD was marginally higher at US$0.714 which saw the EMI in USD terms giving most of last week’s rise back, closing at 813¢. Fremantle selling saw some of Tuesday’s losses clawed back, with a positive 10-cent WMI retracement on Wednesday to leave the Western Market Indicator down 38¢ or 3.1% for the week and now sitting at 1181¢.

No sector was spared as the price decline was across the board, with the Merino types giving up between 4 & 7%, while the strong performance of the Crossbred types last week was mitigated with 9-12% falls recorded this week.

Cardings fell by 33 & 17 cents in Sydney & Melbourne, however Fremantle bucked the trend and lifted 7 cents.

New waves of COVID-19 in Europe and north America are going to delay recovery of apparel demand in these regions, impacting directly on the export market for mills in China, putting a limit on the recovery we can expect in the greasy market for the time being.

This week on Mecardo, Andrew Woods looked at the relationship between Chinese bond yields and the correlation with apparel fibre prices.

Chinese bond yields provide a view that Chinese credit growth will be supportive of firmer apparel fibre prices until around next autumn. This provides some assurance that the lift in prices since early September, or at least a good part of these rises, has a solid underpinning.

The high pass-in rate sent a signal that growers are prepared to step out of this market if demand evaporates; this may provide support to prices. Along with the stronger Fremantle finish to the week we can be cautiously optimistic for next week.

There are 36,666 bales listed for sale with all centres selling on both Tuesday & Wednesday. 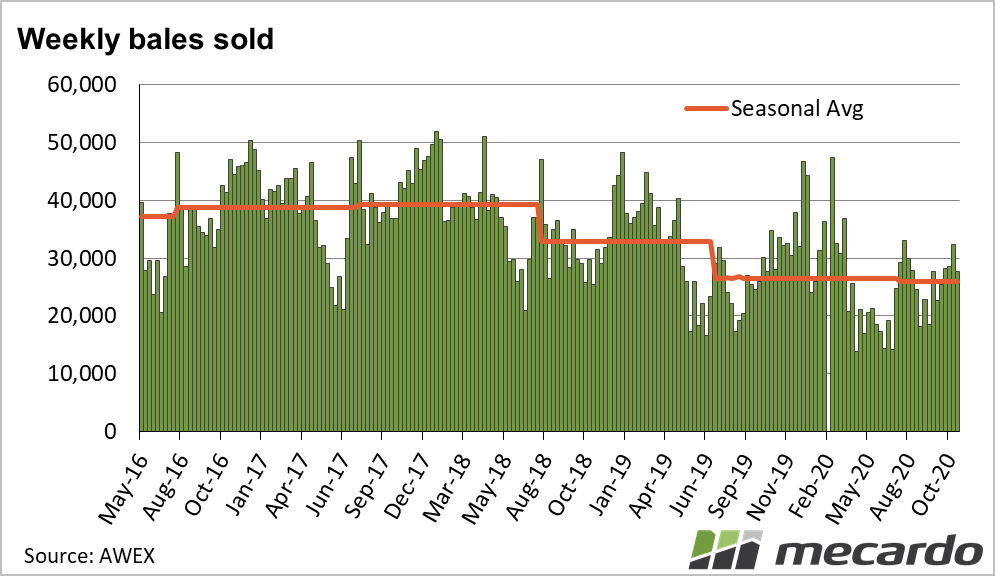