FSR skewed by price and supply

The Australian Bureau of Statistics (ABS) have released their quarterly data for March to June, and it may have us rethinking our traditional herd rebuild indicators. The female slaughter ratio (FSR) climbed back to year-ago levels in the June quarter, but actual slaughter figures have dropped even further again.

The FSR rose to 48% from March to June, up from 45.5 % in quarter one of this year.  This is on par with the same quarter last year (48.2 %), and back above 47 % – which is historically the indication the herd is in a rebuild phase. However, with total cattle slaughter at record lows, and cattle prices at record highs, this may no longer be the clear rebuild marker it once was.

If we look at the FSR state-by-state (keeping in mind ABS figures are released quarterly, and normal seasonality has been used to estimate monthly values), it is NSW which has had the largest increase, lifting 5.5 % on the previous quarter to 46.7 %. Victoria followed closely behind, with its FSR rising 4.4 % to 65.1 %. Both states are experiencing positive seasons and strong prices, which could equate to using the high turnover returns to upgrade female genetics.

Total slaughter for the quarter fell 21% year-on-year and was 24% lower than the five-year average for the same period (March-June). In turn, cattle slaughter for the year-to-June was at its lowest volume since 1974. Total slaughter did rise, however, up 5% from the previous quarter, and female slaughter rose even more sharply, up 11% for the same period. This is a clear indication of the supply shortage, which is supporting the female throughput to continue meeting domestic and export beef demand as much as possible.

The grainfed percentage of total slaughter remained high at 45% last quarter – down from 47% in quarter one, but well up from the 37% recorded in the same quarter in 2020. This has the year-to-date grainfed slaughter percentage at about 46%, which is well and truly the highest on record. This feedlot throughput would have also contributed to increasing the FSR.

While rebuild intent has been clear since much of the east coast started to recover from drought last year, the FSR has only fallen below the traditional rebuild indicator of 47% for one of the quarters since. And with slaughter being at 30-year lows, plus the national medium cow saleyard indicator averaging record highs since quarter three of 2020, this has created a new female turnoff equation. 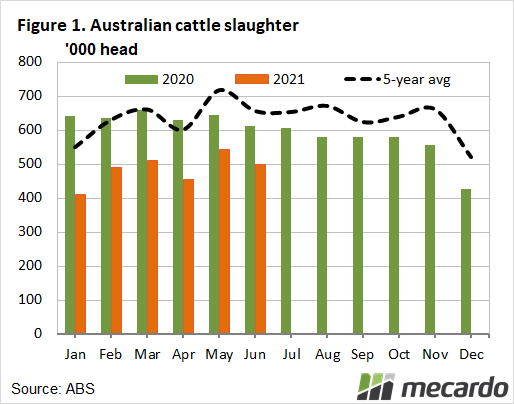