Get them light, hold them tight

Only a few weeks in and it’s been a busy January. Strong prices have got the saleyards pumping again, but processors have been a little slower to get back to speed. The decent show in the yards wasn’t enough to hold lighter lamb prices though this week.

We took a  detailed look at supply in January earlier this week (view here) but the crux of the analysis is that east coast lamb slaughter is at a nine-year low, and the fall can be put down to lower production in Victoria.

It seems as though last week made up for the small number of lambs that presented in yards the week earlier. There was a 72% lift in lamb yardings to see 227,297 head presented, which was actually slightly above the five-year seasonal average for the week.

Restockers who have been pushing up the lamb market appeared to have enough on offer this week, and didn’t have to bid as fiercely for stock. The National Restocker Lamb Indicator lost 34¢ to end at 911¢/kg cwt.  Light lambs came off with the largest loss, ending the week 51¢ lower.

The price of Mutton returned to its year ago level after a 26¢ fall. The National Mutton Indicator is currently sitting at 577¢/kg cwt.

The public holiday next week (and extra long weekend for many) usually causes a bit of volatility in the numbers. After that, we wouldn’t be surprised to see lamb prices ease back, as demand weakens post the Australia Day peak. 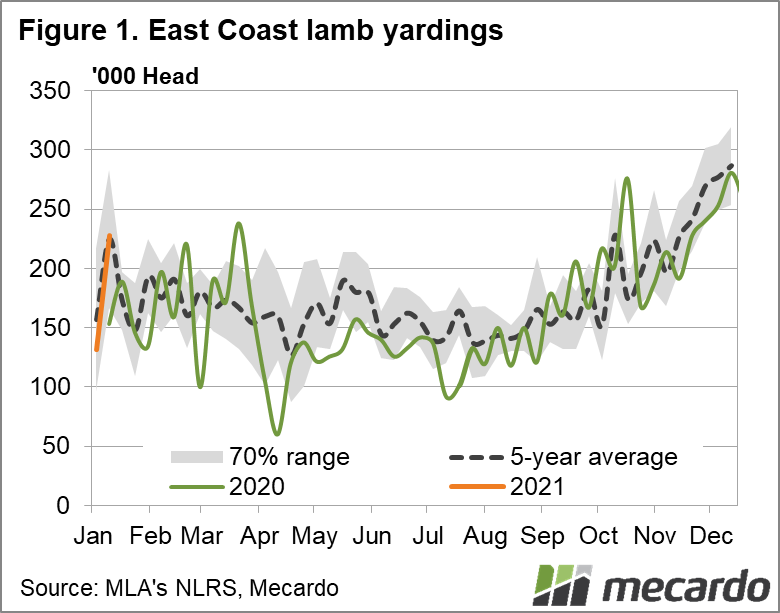