Mutton is back in the limelight. You could argue that it never really left considering how strong the market has been, however this week prices moved to the top with the National Mutton Indicator hitting a level only breached once before.

The Eastern States Trade Lamb Indicator gained an extra 15ȼ over the week to settle at 879ȼ/kg cwt. The ESTLI is currently 13% higher than the same time last year, but still lagging 8% below this time in 2019. The stronger market wasn’t felt in the west where the Western Australian Trade Lamb Indicator lost 20ȼ to end at 766ȼ/kg cwt.

Restockers were active in Victoria, lifting restocker lamb prices 82ȼ to 872ȼ/kg cwt. These lambs are still trading at a discount to NSW, where this week’s market saw restocker lambs 20ȼ cheaper at 896ȼ/kg cwt. Heavy lamb prices continued to rally in all states bar Tasmania. The National Heavy Lamb Indictor gained 13ȼ for the week to 856ȼ/kg cwt, which is an impressive 131ȼ or 18% higher than the same time last year.

This week the National Mutton Indicator gained just 3ȼ to 695ȼ/kg cwt. While a 3ȼ lift might suggest the rally is running out of steam, it was enough to push the NMI higher than we’ve seen in a long time. In fact, the NMI has only ever been higher once, in March of 2020 where it rallied to 729ȼ. To look at mutton prices in USD, it has been more expensive before but at 516 USȼ/kg it is trading at the top end of the range.

Lamb supply eased last week. East coast lamb yardings were down 8% on the week prior to see 168,454 lambs yarded. Victoria and South Australia were the main drivers, with throughput down 21% and 36% respectively. Despite the fall, the total number of lambs yarded was still 7% higher than the five-year seasonal average.

Strong mutton prices are clearly dragging more sheep into yards. For the week ending the 2nd of July, 72,399 sheep were yarded on the east coast which was a 54% lift on the week prior and 41% above the five-year seasonal average. It was a different scene at processors though. A 28% drop in sheep slaughter volumes on the week prior saw 50,746 sheep processed in the east which was slightly higher than the same week last year but 28% below the five-year seasonal average.

Current mutton prices should be drawing out any surplus sheep and that might put an end to the upside. For lambs, there is still room for supply to tighten further particularly at saleyards, however supply seems to be following a pretty similar trend to 2017, where no significant winter price peak was found. Although, winter prices did hold for longer than normal in 2017. 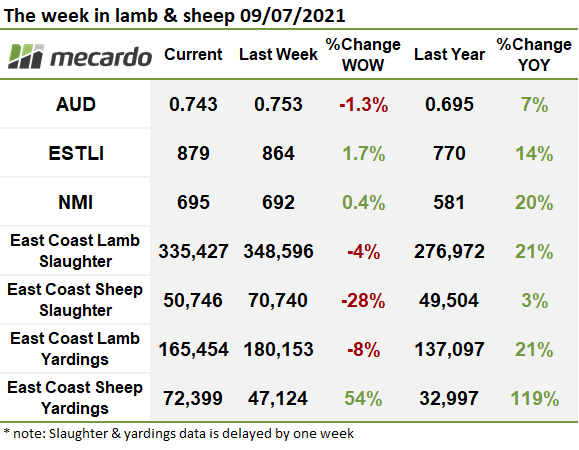