Wheat market remains in a holding pattern, if anything drifting lower on the absence of any news that would propel it higher. The next big data dump will be the March 31 USDA’s stocks and acreage report. This will give us a good look at how much carryout has been eaten in to, but also the key driver of corn and soybean planting intent.

It is possible to find bullish news – record week on week corn exports (China has bought 21mmt of US corn to date), and above expectation wheat exports – but it seems to be getting lost in the building optimism around the new season crop conditions.  Speculative money in the wheat pit also seems to be sliding, with managed money investors reducing their bought (LONG) positions.

I suspect the reason we are seeing prices slide now is because the threat of winter kill damage is diminishing.  Russia has ample moisture and crop conditions are very good.  In fact Russian analyst SovEcon has lifted their forecast of the 2021 wheat crop from 76.3mmt to 79.2mmt off the back of a very benign winter.  Perhaps the stabilising of domestic food supplies (prices) will prompt the Russian Gov’t to review the Export Tax.  Ag Minister Dmtry Patrushev is reported to have suggested Russia was prepared to “stop interfering in the regulation of grain exports when the market stabilises”.  This would help regain some clarity around trade flows and would likely be bearish for wheat.

The US Plains had good rainfall in the past couple of days alleviating concerns around prevailing dryness.  Heavy snow in the mid West US will also set up row crop planting in the next couple of months with ample moisture.

Similarly, Argentina is forecast to get rain this week which will be sorely needed.  Argentina’s soybean crop is only rated 6% good to exc, and corn is 17% good to exc down from 25% last week.  Whether any rain now will actually build production is dubious, but it may halt the slide.  Lastly, the East Coast of Australia looks to be gearing up for seeding on a full profile of moisture creating a platform for another above average season.

The deterioration of La Niña is seeing very wet conditions in Brazil.  Planting of the safrinha (second) corn crop is very slow at 88% complete compared with 98% for this time on average.  The Brazilian farmer has made up some ground in the past week but further rain will put the remaining acres in jeopardy.  Despite this, CONAB (official Brazilian analyst) raised production estimates for the countries corn crop.  As the saying goes, there is money in mud!

Across the pond, French spring barley program is 90% complete. The area is down 40% from last year as farmers have been able to get their winter sown cereals through winter without too many issues.  Expect European crops to rebound year on year. French wheat is rated at 88% good to exc with modelled yield predictions suggesting 8t/ha average and a 10mmt crop bigger than last year.

Northern Hemisphere weather will be a key driver going forward.  It is true that key exporters have seen a tightening of wheat stocks, so this will throw added importance on production across all ag commodities.  The absence of any perceived threat will act like an handbrake on prices. 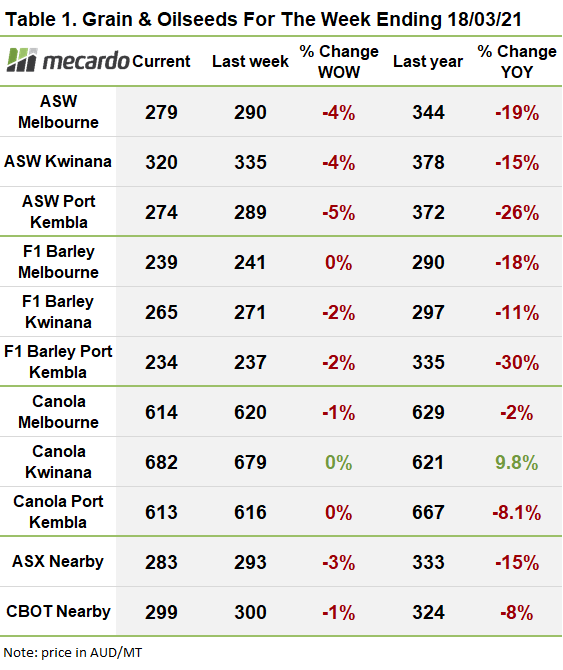