Grain-fed cattle made up nearly half of total slaughter in the March quarter - the highest percentage on record. The number of cattle on feed in Australia has been steadily increasing over the past 30 years - and with the country being drought declared for more than a third of that time, it is little wonder.

National feedlot capacity is also now at a record high, having reached 1.45 million. Furthermore, record-high feeder steer prices haven’t (yet) managed to push the cattle on feed numbers below 1 million head, showing that the grain-fed sector – which has been critical in ensuring supply both during drought and herd rebuilds – will likely continue to grow.

Breaking through the 1 million head mark in the first quarter of 2017, the number of cattle on feed has only fallen back below 1 million for one quarter since. Despite sky-high young cattle and feed prices resulting in some tight margins at times in recent years (our latest analysis on margins here) the five-year average for numbers on feed is also above 1 million head (1,038,043). Herd rebuilding demand pushed that figure down to 1,005,035 in the March quarter of this year, down 4% from the previous three-month period, however, this also meant feedlot marketings rose 2.5%, as grass-fed processing cattle became harder to find.

Utilisation of the record-high capacity was at just 69% for the first three months of 2021 (compared to the five-year March quarter average of 80%), but herd volumes are also at historical lows. Grain-fed beef made up 47% of total cattle slaughter in Australia in that time, compared to 42% the previous quarter, and 45% in the same quarter in 2020. By our calculations, this is the highest grain-fed slaughter percentage yet. Meat and Livestock Australia’s latest cattle projections say 44% of all Australian beef production is from lot-fed animals, and they expect that figure to stay there or climb higher.

Lot-feeding (along with bumper seasonal conditions in many production areas) is also contributing to new highs being recorded for cattle carcase weights. Feeder cattle are going in heavier and coming out heavier, with MLA reporting that male cattle averaged 341kg carcase weight in the March quarter, with females at 281kg (311kg average). To put this into perspective, cattle carcass weights averaged 294.8kg in 2020, and the highest average in the past five years was 297.6kg in 2017. MLA also pointed out that for the year to April, feeder cattle had been entering feedlots at 424kg: 33kg heavier than in 2020.

Lot-feeding has made serious moves in the Australian beef industry in the past three decades and is crucial to continued supply. The number of cattle on feed compared to the total cattle herd and their percentage of slaughter and beef production indicate its importance in the industry currently, and the increase in capacity shows the sector is set to grow from here, with plenty of optimism from those in it. Next week we will look at grain-fed beef’s role in our export markets, and its place in underpinning supply. 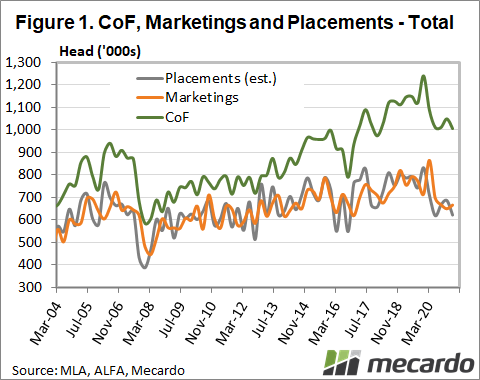 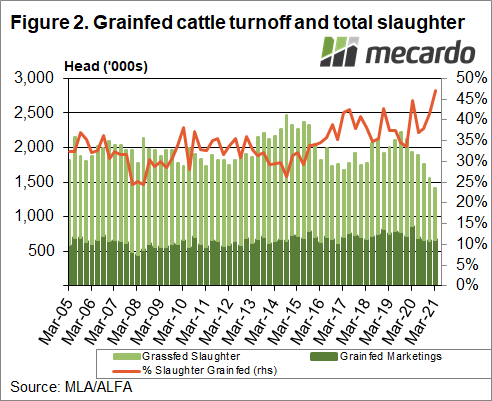