The COVID-19 pandemic has caused demand to drop precipitously, as it has for apparel fibres generally. The drop in demand means that less wool, from all regions, has flowed through the supply chain in 2020. As a consequence, grower held stocks have built up. This article takes a quick look at Australian greasy wool stocks.

In a normal (non-pandemic) down cycle, lower prices help to stimulate demand. The difference with the current downturn is that demand is not easily stimulated, as it has been reduced by physical limitations to shopping imposed by lockdowns. Online shopping has increased to partially compensate for the lack of sales in bricks and mortar shops, but as ICAC has discussed in recent publications (about the cotton industry), a lot of damage has been done to supply chains by the economic shock of the past two quarters and recovery from such shocks takes time and the shock is still playing out. The upshot is that less raw material, in our case greasy wool, has been required so stocks have built up at this end of the supply chain.

Figure 1 shows annual auction sales as a proportion of AWTA core test volumes (clean kg base) from 2007-2008 onwards, with the current season running to May. As a rule, auction sales have operated around 83-85% of AWTA volumes, which are a proxy for Australian wool production, falling to around 80% in 2008-2009 (financial crisis) and around 2014 (economic downturn). Note that the proportion fell to this level again last season (2018-2019) as wool prices fell from their peak levels reached in mid-2018.

Figure 2 shows the annual difference in the clearance rate shown in Figure 1 relative to 85%. This schematic is a rough farmer greasy wool stock measure. It shows that stocks have picked up in some years and fallen in others, which is consistent with the supply chain feedback in the years leading up to 2018 of little Merino stocks being available generally (along the supply chain).

In 2018-19 stocks, on this measure, picked up by 4% and have picked up by another 13% this season (to May). That seems to put Australian wool stocks at around 17% of production. At this stage the prospects for the coming spring are not good as the industry has yet to see demand picking up. A combination of the spring flush in wool in Australia with continued weak demand points to stocks building again next season.

It will be a similar situation in other southern hemisphere wool producing regions such as South Africa, New Zealand (compounded by very depressed carpet wool prices) and South America.

Lower prices can’t help clear greasy wool production in the current down cycle as demand has been drastically constrained. Less demand means that stocks at the upper end of the supply chain will build and they have done so this season. The indications are that this state of affairs will persist into the coming spring. In the longer run the stocks will slow the subsequent recovery but not to the extent of the 1990s as production is now low whereas in the early 1990s it was at record levels. 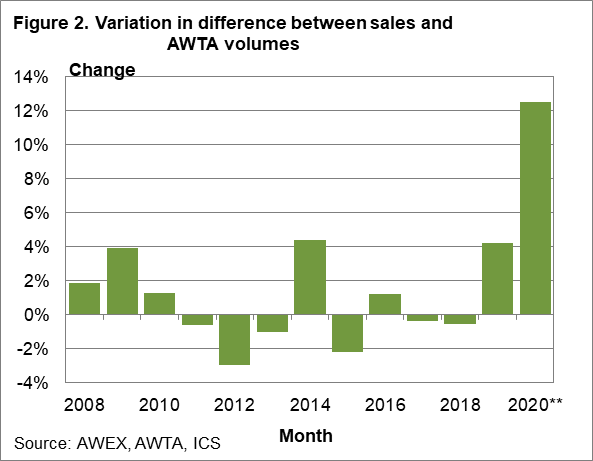