With the supply chain which greasy wool supplies disrupted by delays to orders and payments, the effective demand for greasy wool has fallen quickly. The situation is a common one across the apparel textile industry, regardless of the fibre considered. One of the consequences of this will be an increase in grower held stocks of greasy wool which this article takes a preliminary look at.

The last official Australian stockpile of greasy wool was finally liquidated in August 2001, a decade after it was amassed. Since then the level of stocks at the grower/broker level has trended lower (although they are not officially reported on). In recent years reports have consistently indicated that merino stocks held by early stage processors have also been very low.  With final (retail) demand reported to have shrunk as a function of lockdowns due to COVID-19, stocks are set to increase.

Wool exports from South Africa, New Zealand and Argentina are on hold while these countries are in lock down. They account for approximately 25% of merino wool production, so they have the capacity to add significantly to grower held stocks. Keep in mind these countries produce different types of merino wool. The South African clip is mainly medium to broad (in Australian terms) with short staple length. The New Zealand merino clip (only 7% of the entire New Zealand clip) is fine while the Argentine clip is on the broader side of the Australian production.

Figure 1 shows the seasonal pattern of wool exports from New Zealand, South Africa and Argentine. It is the average monthly proportion of exports from recent seasons (slightly earlier for South Africa in order to avoid the disruption caused by the Foot and Mouth outbreak in early 2019). These countries went into lockdown for a month in late March. Figure 1 shows that some 8-10% of annual exports are shipped month at this time of the year. Given they account for a quarter of merino production, a month’s supply will account for about 2.5% of annual supply. Therefore stocks will build by 2.5% or annual production for every month these countries do not export wool.

Figure 2 shows a seasonal pattern for Australian auction sales from recent seasons. Like the other regions around 8-10% of annual wool production is expected to be sold in the next few months. Here is where the guessing really starts. WTiN reported IWTO information indicating Chinese garment sales at major retailers in China was down 30% in Jan-Feb 2020. Reports also indicate that export orders have effectively stopped in China, and the general assumption is that half of the Australian clip is processed in Chin and then exported in some form. If we assume demand has shrunk, for the time being by 30-50%, it indicates that for each month of the crisis between 3% and 4.5% of annual Australian merino production is surplus and will likely be held by growers as stock. Add the Australian stock to the other southern hemisphere exporters and it totals to 5% to 6% of annual production for every month of the crisis (roughly). This is on top of reported increased Australian grower stocks already.

A period of reduced demand, such as the textile markets are going through at present, generally means that production will bank up with growers holding more stock. The problem in the various markets (including wool) is not price but a constriction of demand, so lower prices will not necessarily see higher volumes flowing along the supply chain.

Stocks built up during a period of weak demand have to be cleared at some point, so they are likely to slow the recovery of prices on the other side of this crisis, although this is dependent on the level of stocks built. 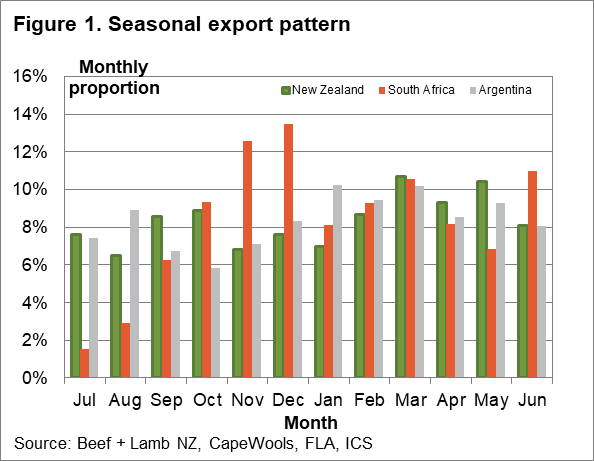