Following one from the article earlier this week about the gross sales value of crossbred wool, volume and price we look at comparable data for fine (16-18 micron) and broad (20-22 micron) merino wool.

In May of 2021 Mecardo looked at fine and broad merino gross sales value, volume and price in annual terms, running from the mid-1990s onwards. Figure 1 shows the annual gross sales value (GSV) in US dollar terms for 16-18 micron merino wool sold at Australian auctions, along with the median level since 2011 (which is US$607 million) with both series referring to the right hand axis. The annual volume for these micron categories is shown in the line overlaid on Figure 1 which refers to the left hand axis.

Since 2015 the volume of 16-18 micron sales has been tracking sideways, with no discernible trend, either up or down, which is stark contrast to the rising trend in supply from the mid-1990s through to 2015. Since 2015 while the sale volume has steadied, the GSV has varied greatly and therefore price has as well. The 2021-22 season, just finished, has proved to have the third highest GSV on record for 16-18 micron wool. Not only did the supply chain pay high premiums/prices for fine merino wool last season but they also used a lot of capital in doing so. Figure 2 shows the annual GSV and price for 16-18 micron merino wool, with a clear correlation between price and GSV since 2015.

In the 2021 article on fine merino wool a question raised in one of the articles as to whether the decade median gross sales value of US590 million dollars was the new benchmark. The experience of the past three years points to the decade median as being the low point for the GSV cycles, as it was in 2020.

Figure 3 repeats Figure 1 using data for the 20-22 micron categories. The trend in supply, a falling one, looked to have steadied up in 2015 with the 2017-2019 drought in eastern Australian regions extending the downtrend for an extra couple of years. Time will tell if this is the case.

In 2018-19 the GSV for 20-22 micron wool started to fall, but supply fell faster thereby pushing price to extreme levels (anyone remember the three year forward prices for 21 micron above AUD2100 cents?). This shows up in Figure 4 which compares the GSV and price for 20-22 micron merino wool. Unlike the finer merino categories the GSV for 20-22 micron has yet to return to the levels of 2015 and 2019, let along 2017 and 2018. Expenditure on broad merino remains low by historic standards.

In some seasons a changing supply of fine wool will explain a lot of the change in micron premiums and discounts. Last season the supply (defined here as auction sales) of 16-18 micron did fall but only by 1.2%, while the GSV rose by 14.5% thereby underpinning a 16% rise in price. For 20-22 micron merino wool sales rose by 3%, GSV by 7.7% so prices only lifted by 4.5%. The supply chain simply wanted fine wool, and were prepared to pay a lot to secure supply. 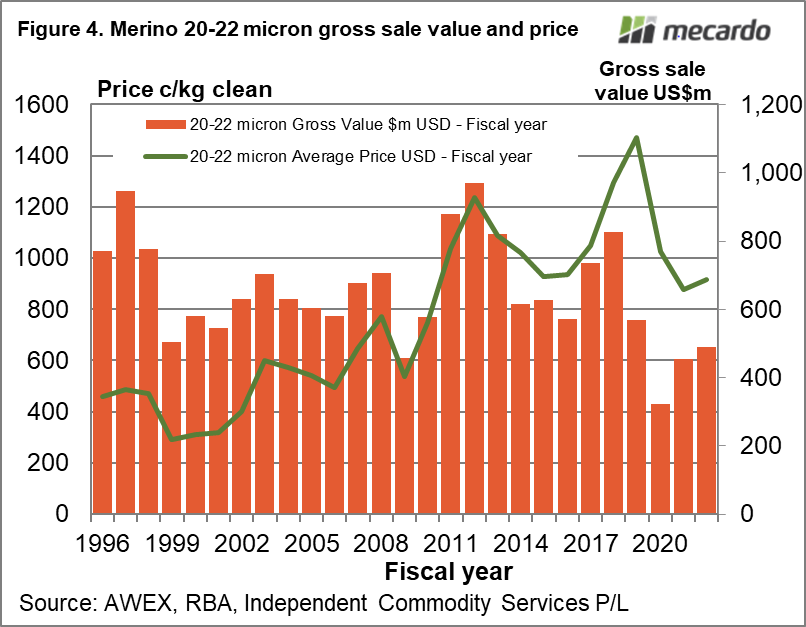