Keen wheat market observers would be aware of the slippery slope prices have been on in recent times. With the good start to the season in Australia and solid prospects for the crop, the market is now very much linked to a falling US market coming under harvest pressure.

Harvest pressure from the US is something we haven’t seen for a few years.  Wet weather during harvest has actually seen US wheat futures rally in June in the last three years before harvest pressure has kicked in. This year the market appears to be succumbing to harvest pressure as wheat come off.

Poorer crop conditions had been helping prop up US wheat prices. With 52% of the crop rated good or excellent, it was 9 points behind the same week last year.  The very poor and poor crop condition was at 17%, compared to 11% last year.  Poorer overall crop conditions suggest lower yields, but this doesn’t seem to have encouraged growers to hold on to harvest grain.

Up until Sunday 29% of the US winter wheat crop had been harvested, compared to just 13% in the same week last year. The quick pace, which saw 14% of the harvest come in just last week, has harvest tracking 3 points above the five-year average.

The impact on price can be seen in figure 1.  Since rallying to close to a four year high at the end of March, CME wheat futures have been on a steady decline.  From 580¢, the spot Soft Red Wheat contract has lost 16.7% to hit an 8 month low last week.

The recent movement contrasts with the last three years. The red circles on figure 1 show how the market rallied in June, creating what used to be a rare opportunity to hedge our crop in winter.  The rally didn’t last. As the wheat harvest came in and combined with the corn harvest, values were pushed lower in July and August.

In terms of supply, the World Agricultural Supply and Demand Estimates (WASDE) report released recently isn’t suggesting the world will be short of wheat. Figure 2 shows the stock to use ratio ticking higher this year, which in theory should see prices returning to the low 400¢/bu level.

It’s not nice to wish production issues on other growers but to see wheat prices rise it is increasingly looking like we need some weather impacts in the US, Europe or the Black Sea regions.

With wheat swaps for December currently sitting at $265/t there isn’t a lot of incentive for hedging locally, but the bottom of the market could still be $30-40 away, and some consideration should be given to doing some selling on any rally. 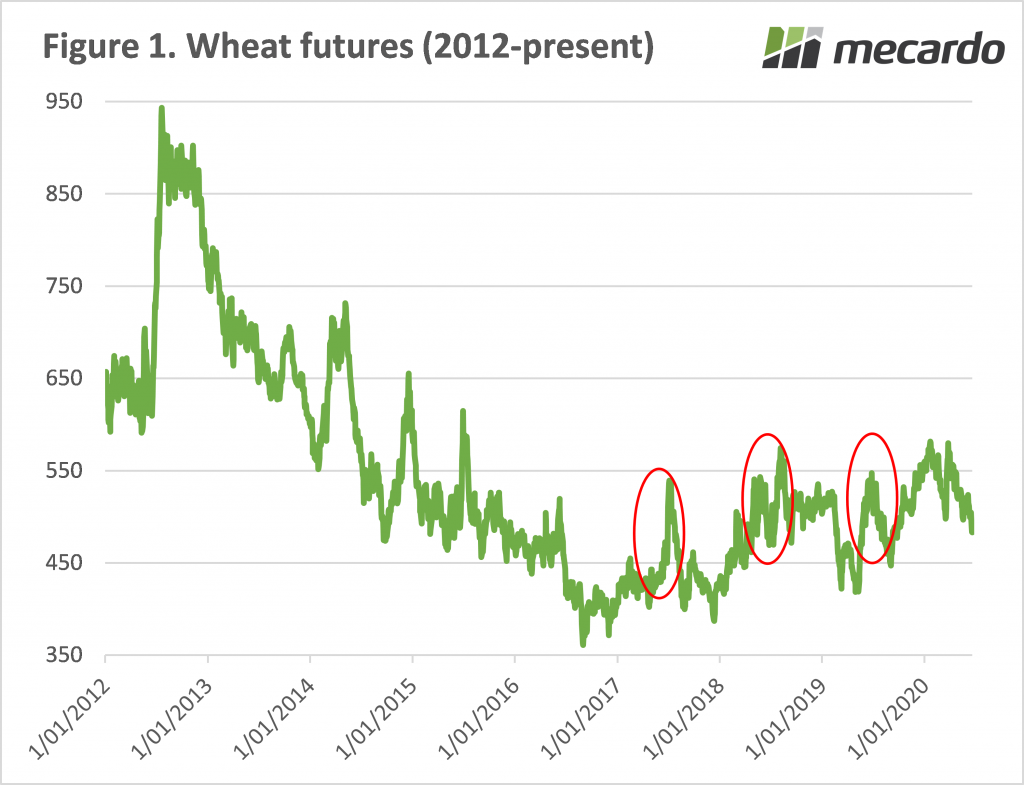