Harvest pressure – will it ever end?

It feels like the wheat market is limping into the end of the year. It has been quite the year so you could excuse the market for looking a little fatigued. CBOT futures have weakened a little in the past month as a series of adjustments to global wheat inventories, due to improved production and weakened demand, loosened the balance sheet a little. A technical sell off earlier this week was also observed as the managed money crowd sought to re-balance their positions in the lead up to the holiday period.

Closer to home we have seen prices for ag commodities come under enormous strain in the past week, with wheat and canola feeling the greatest pressure.  In this article I thought we’d explore the reasons for the slump in prices and whether we can expect any improvement.

The Australian farmer has enjoyed one of the best years in recent history as a combination of well above average yields (not everyone fell in this category unfortunately) and surging prices.  The season has obviously thrown up a few obstacles – hail and flooding especially on the East Coast, as well as weather related quality issues.  But once harvest has completed, I think the farmer can be well pleased with what they have been able to achieve.

The Aussie wheat harvest is tipped to be a record with production estimates now ranging from 34-37mmt, which has in itself created a few problems.  Firstly, port congestion is limiting exporter demand.  There is simply not enough capacity to export everything that is hitting the market.  So the trade are adjusting their prices to send a signal about their appetite to own.  The message in this week’s price action is clear, we want your wheat, just not now.

The second issue is around credit limits.  After the 2016 drought induced feeding frenzy, where the trade bought extremely high-priced grain only to face falling global prices, most trading houses introduced much stricter oversight on spending.  The trade now have to remain within daily, weekly and monthly credit limits.  With commodity prices hitting records, it was only a matter of time before these credit limits were reached.  It probably should have happened earlier than this, but the weather interrupted harvest has delayed the inevitable.

It appears to me that the market has reached saturation for the time being.  Credit limits have been triggered with traders reducing prices to manage their cash flow.  Simple back-of-the-envelope math’s suggests that a 4.5mmt canola crop at roughly $900/t means the trade has forked out over $4B alone in the past couple of weeks.  When you consider that lentils are trading at $1000/t, barley around $300/t and wheat at over $380/t  (grade dependent), the amount of money going out is staggering.

This harvest pressure occurred last year around the same date as well.  A huge East Coast harvest with above average prices ended up squeezing trader credit limits.  The good news is, once the new year began, trading credit limits were renewed and price reclaimed some lost ground.

This year I suspect we will see similar action.  Once the trade have re-established their credit and can ascertain exactly what stock they hold post Dec 31st, I think they will re-engage with the grower to fill any missing gaps in their stocks or to manage quality for new sales.   Will prices hit the highs they did in early harvest?  Much will depend on quality being offered to the trade.  I suspect the highs are behind us but with good demand, I feel that growers will enjoy good post-harvest price opportunities.

Short term, prices will remain under pressure.  Unfortunately, as prices drop, it can spur on a round of panic selling, placing further pressure on the price.  I think time is on our side, especially if holding on to lower quality grades. 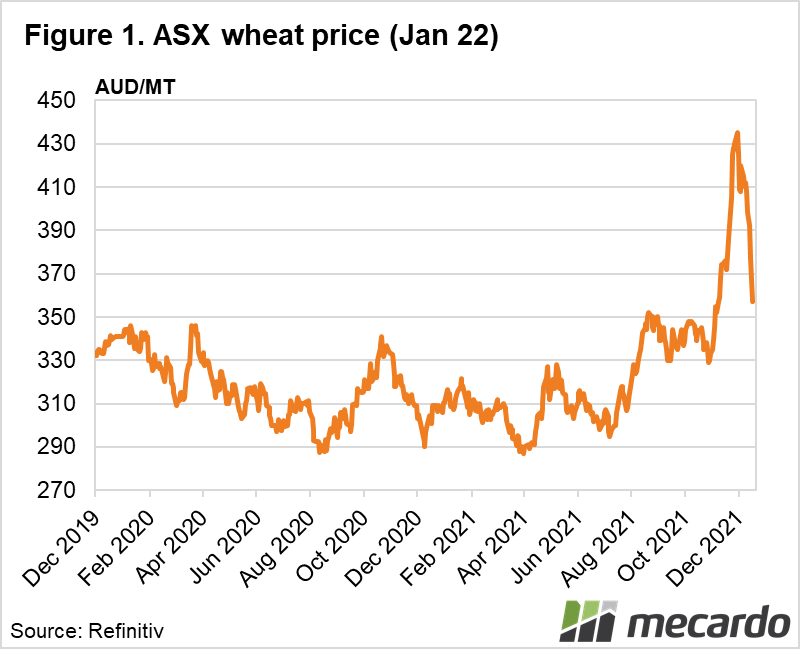