Last Friday night, the USDA released their July WASDE report. Unlike their acreage report a week earlier, there were relatively few surprises. The one element that surprised a little was the tighter than expected SRW stocks which saw CBOT wheat rally whilst other wheat markets went lower.

The general tone of the report continues to paint a bearish picture across the global grain markets with big stocks for all three major Ag commodities against a back drop of uncertain demand. Global wheat production is lower by 4mmt to 769mmt (US -1.5, EU -1.5, RU -0.5), while global consumption is lower by ~2mmt to 751mmt (EU -1.0). Major exporter stocks lower by 1.32mmt to 60.66mmt.

Chinese stocks are believed to be at 162mmt or 51.5% of global stocks and Indian stocks at 31mmt or 10% of global stocks. It is interesting to note that last night, the Chinese bought US SRW resulting in a significant rally in CBOT (Dec ’20 +21 USc/bu). Whether this is part of the Phase 1 deal or a shift in Gov’t policy to build state inventories is unclear.

We are entering the seasonal period where the market will take its lead from final northern hemisphere production. We are already seeing some tweaks to estimates, with USDA and IKAR (Russian Analyst) now in step with each other, agreeing to reduce Russian production to 76mmt, down 1.5mmt. Russian FOB prices are also starting to rise, likely due to slow grain receivals in the poorer Southern areas but also news of reduced exports from France. The Russian Gov’t also wants to build state inventories to replace that used during the COVID-19 lockdown.

EU27 production is also in the gun, with USDA forecasting both production and exports to be down year on year. The EU27 is expected to be the lowest since 2012 at 139mmt, down 15mmt from last year (mainly due to reductions in France and Spain). Attention will turn to short term weather (particularly in the US corn belt) but also Southern Hemisphere production. Currently it feels that the market is grappling with uncertain demand, COV-19 and a looming La Nina. Prices are likely to trade in a range, barring any shocks, bouncing between 470 – 550 USc/bu.

If China starts to ramp its promised purchase of US Agricultural goods as agreed to under the US/China Phase 1 trade deal, we could see some fireworks. Poorly positioned shorts in CBOT will come under pressure and will need covering. It is unusual to see wheat rally in the middle of harvest, but we live in unusual times. 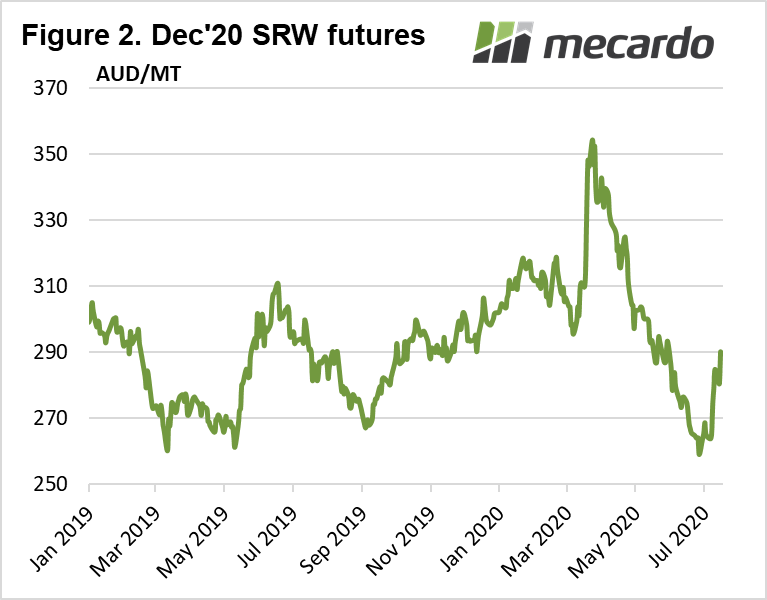